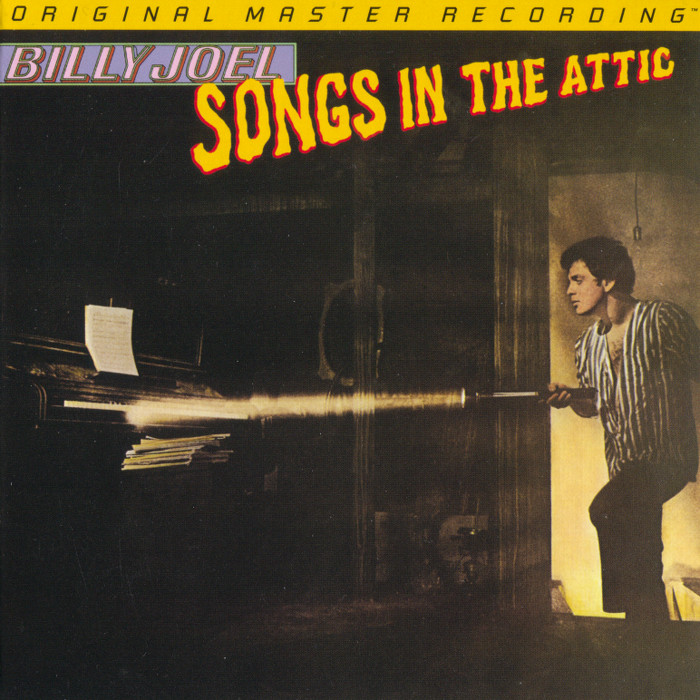 Songs in the Atticb is Billy Joel’s first live album, and was recorded during his Glass Houses Tour in June-July 1980. It introduced Billy Joel’s early work to fans who had come to know his work after The Stranger, and also showcased his touring band, with whom he had been playing for some time. Two singles from the album (“Say Goodbye to Hollywood” and “She’s Got a Way”) were released and made it into the top 25 on the charts.

Having scored three multi-platinum hits in a row, Billy Joel took a breather, releasing his first live album, Songs in the Attic, as he worked on his ambitious follow-up to Glass Houses. Joel wisely decided to use the live album as an opportunity to draw attention to songs from his first four albums. Apart from “Piano Man,” none of those songs had been heard by the large audience he had won with The Stranger. Furthermore, he now had a seasoned backing band that helped give his music a specific identity – in short, it was an opportunity to reclaim these songs, now that he had a signature sound. And Joel didn’t botch the opportunity – Songs in the Attic is an excellent album, ranking among his very best work. With the possible exception of the Turnstiles material, every song is given a fuller, better arrangement that makes it all spring to life. “Los Angelenos” and “Everybody Loves You Now” hit harder in the live setting, while ballads like “She’s Got a Way,” “Summer, Highland Falls,” and “I’ve Loved These Days” are richer and warmer in these versions. A few personal favorites from these albums may be missing, but what is here is impeccable, proving that even if Joel wasn’t a celebrity in the early ’70s, his best songs of the era rivaled his biggest hits.