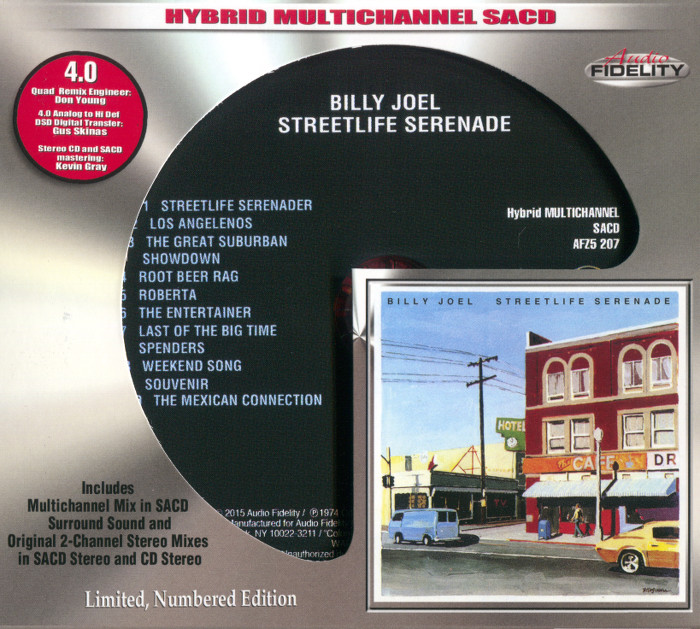 Billy Joel hit a bit of a slump with Streetlife Serenade, his third album. Stylistically, it was a reiteration of its predecessor’s Tumbleweed Connection obsessions, spiked with, of all things, Rockford Files synthesizers and ragtimes pulled from The Sting. That isn’t a facetious reference, either – it’s no coincidence that the record’s single and best song, “The Entertainer,” shares a title with the Scott Joplin rag that provided The Sting with a main theme. Joel is attempting a grand Americana lyrical vision, stretching from the Wild West through the Depression to “Los Angelenos” and “The Great Suburban Showdown.” It doesn’t work, not only because of his shortcomings as a writer, but because he didn’t have the time to pull it all together. There are no less than two instrumentals, and even if “Root Beer Rag” (yet another sign of The Sting’s influence) is admittedly enjoyable, they’re undeniably fillers, as is much of the second side. Since he has skills, he’s able to turn out a few winners – “Roberta,” a love song in the vein of Cold Spring Harbor, the mournful “Streetlife Serenader,” and the stomping “Los Angelenos” – but it was the astonishingly bitter “The Entertainer,” where he not only disparages his own role but is filled with venom over “Piano Man” being released in a single edit, that made the subtext clear: he had enough with California, enough with the music industry, enough with being a sensitive singer-songwriter. It was time for Billy to say goodbye to Hollywood and head back home to New York.