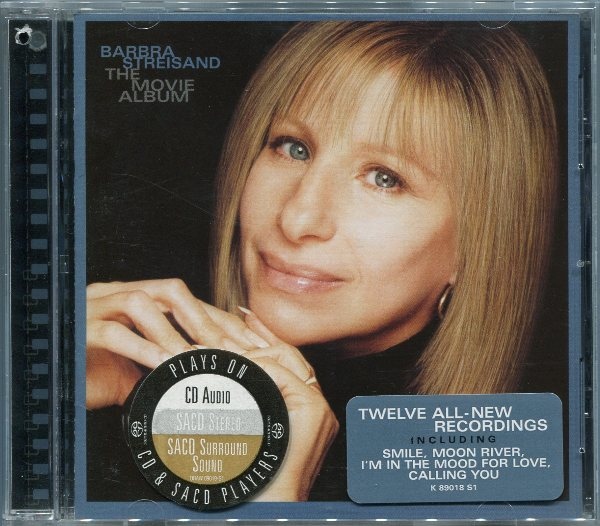 It’s a given that Barbra Streisand loves being a movie star. But this collection of pop songs culled from 60+ years of Hollywood history displays a love and understanding of movie songcraft whose depth is surprising, even coming from the legendary diva.

The idea of Barbra Streisand making an album of movie songs is a no-brainer; as annotators Jay Landers and Richard Jay-Alexander point out, she has already recorded over 50 songs written for motion pictures on her 59 previous albums. In fact, the only real challenge may be a marketing one for Columbia Records, since potential customers simply may assume this is a compilation of some of her previous performances. It is not. Rather, it is a newly recorded collection of songs chosen and arranged in Streisand’s inimitable style. In keeping with the movie theme, she has thought big, using a 75-piece orchestra of the kind usually only found on a studio back-lot for a soundtrack. But all that firepower is used for support, not for its own sake. The key word here is “lush,” not lavish. Streisand’s immediately identifiable voice floats over the music, never challenged by it, so she is able to achieve her usual close-up, detailed performance, alternately intimate and expansive. At 61, she retains remarkable purity and range in her voice, though she is less interested in demanding effects. This is a smooth, conversational vocal album. Streisand’s song collection is characteristic of her. As usual, she isn’t much interested in the Great American Songbook of the interwar period. Only two songs, 1935’s “I’m in the Mood for Love” and 1936’s “Smile,” date from before her birth, with most songs coming from the ’50s and ’60s. And, as usual, the songs as written sometimes don’t satisfy her, so she has prevailed on the composers to change them. Johnny Mandel willingly wrote a new verse to her specifications for “Emily,” and Bob Telson did the same for the obscure “Calling You” from Bagdad Café. Streisand’s age is reflected in her choices, too. She frequently goes for lyrics about mature love such as “How Do You Keep the Music Playing?” and “The Second Time Around,” and she sounds more convincing singing them, giving the words more emphasis than she does, for instance, when she just tosses off the line “You’re life itself!” in “Wild Is the Wind.” As she herself notes, “You’re Gonna Hear from Me,” which closes the album, is reminiscent of the assertive songs she sang in her youth, such as “Don’t Rain on My Parade,” and that makes it all the more notable that she sings it in such a mellow way, as a fond memory rather than an upstart declaration. It makes a fitting closer. If The Movie Album is not the sort of revelation that Streisand’s 1985 masterpiece, The Broadway Album, was, it nevertheless gives the listener some superior new takes on standards the singer has not addressed previously and uncovers a gem or two that had been overlooked till now.