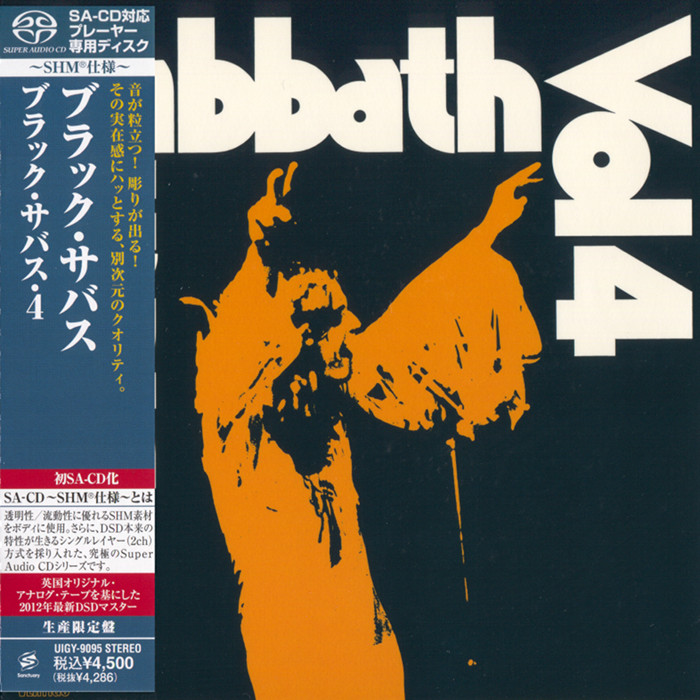 Uses 2012 DSD master based on the UK original analog tape. Reissue features the high-fidelity SHM-SACD format (fully compatible with standard SACD player, but it does not play on standard CD players). DSD Transferr

Vol. 4 is the point in Black Sabbath’s career where the band’s legendary drug consumption really starts to make itself felt. And it isn’t just in the lyrics, most of which are about the blurry line between reality and illusion. Vol. 4 has all the messiness of a heavy metal Exile on Main St., and if it lacks that album’s overall diversity, it does find Sabbath at their most musically varied, pushing to experiment amidst the drug-addled murk. As a result, there are some puzzling choices made here (not least of which is the inclusion of “FX”), and the album often contradicts itself. Ozzy Osbourne’s wail is becoming more powerful here, taking greater independence from Tony Iommi’s guitar riffs, yet his vocals are processed into a nearly textural element on much of side two. Parts of Vol. 4 are as ultra-heavy as Master of Reality, yet the band also takes its most blatant shots at accessibility to date — and then undercuts that very intent. The effectively concise “Tomorrow’s Dream” has a chorus that could almost be called radio-ready, were it not for the fact that it only appears once in the entire song. “St. Vitus Dance” is surprisingly upbeat, yet the distant-sounding vocals don’t really register. The notorious piano-and-Mellotron ballad “Changes” ultimately fails not because of its change-of-pace mood, but more for a raft of the most horrendously clichéd rhymes this side of “moon-June.” Even the crushing “Supernaut” — perhaps the heaviest single track in the Sabbath catalog — sticks a funky, almost danceable acoustic breakdown smack in the middle. Besides “Supernaut,” the core of Vol. 4 lies in the midtempo cocaine ode “Snowblind,” which was originally slated to be the album’s title track until the record company got cold feet, and the multi-sectioned prog-leaning opener, “Wheels of Confusion.” The latter is one of Iommi’s most complex and impressive compositions, varying not only riffs but textures throughout its eight minutes. Many doom and stoner metal aficionados prize the second side of the album, where Osbourne’s vocals gradually fade further and further away into the murk, and Iommi’s guitar assumes center stage. The underrated “Cornucopia” strikes a better balance of those elements, but by the time “Under the Sun” closes the album, the lyrics are mostly lost under a mountain of memorable, contrasting riffery. Add all of this up, and Vol. 4 is a less cohesive effort than its two immediate predecessors, but is all the more fascinating for it. Die-hard fans sick of the standards come here next, and some end up counting this as their favorite Sabbath record for its eccentricities and for its embodiment of the band’s excesses.