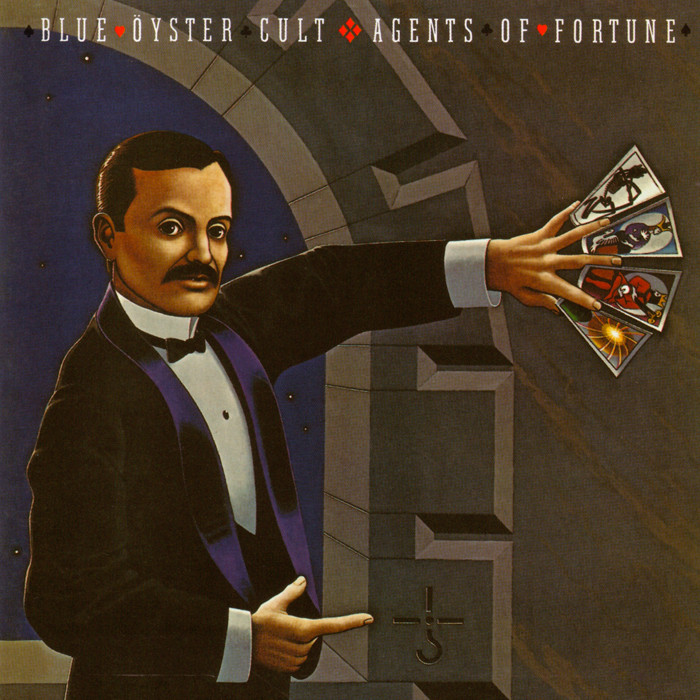 If ever there were a manifesto for 1970s rock, one that prefigured both the decadence of the decade’s burgeoning heavy metal and prog rock excesses and the rage of punk rock, “This Ain’t the Summer of Love,” the opening track from Agents of Fortune, Blue Öyster Cult’s fourth album, was it. The irony was that while the cut itself came down firmly on the hard rock side of the fence, most of the rest of the album didn’t. Agents of Fortune was co-produced by longtime Cult record boss Sandy Pearlman, Murray Krugman, and newcomer David Lucas, and in addition, the band’s lyric writing was being done internally with help from poet-cum-rocker Patti Smith (who also sings on “The Revenge of Vera Gemini”). Pearlman, a major contributor to the band’s songwriting output, received a solitary credit while critic Richard Meltzer, whose words were prevalent on the Cult’s previous outings, was absent. The album yielded the band’s biggest single with “(Don’t Fear) The Reaper,” a multi-textured, deeply melodic soft rock song with psychedelic overtones, written by guitarist Donald “Buck Dharma” Roeser. The rest of the album is ambitious in that it all but tosses aside the Cult’s proto-metal stance and instead recontextualizes their entire stance. It’s still dark, mysterious, and creepy, and perhaps even more so, it’s still rooted in rock posturing and excess, but gone is the nihilistic biker boogie in favor of a more tempered — indeed, nearly pop arena rock — sound that gave Allen Lanier’s keyboards parity with Dharma’s guitar roar, as evidenced by “E.T.I.,” “Debbie Denise,” and “True Confessions.” This is not to say that the Cult abandoned their adrenaline rock sound entirely. Cuts like “Tattoo Vampire” and “Sinful Love” have plenty of feral wail in them. Ultimately, Agents of Fortune is a solid record, albeit a startling one for fans of the band’s earlier sound. It also sounds like one of restless inspiration, which is, in fact, what it turned out to be given the recordings that came after. It turned out to be the Cult’s last consistent effort until they released Fire of Unknown Origin in 1981.