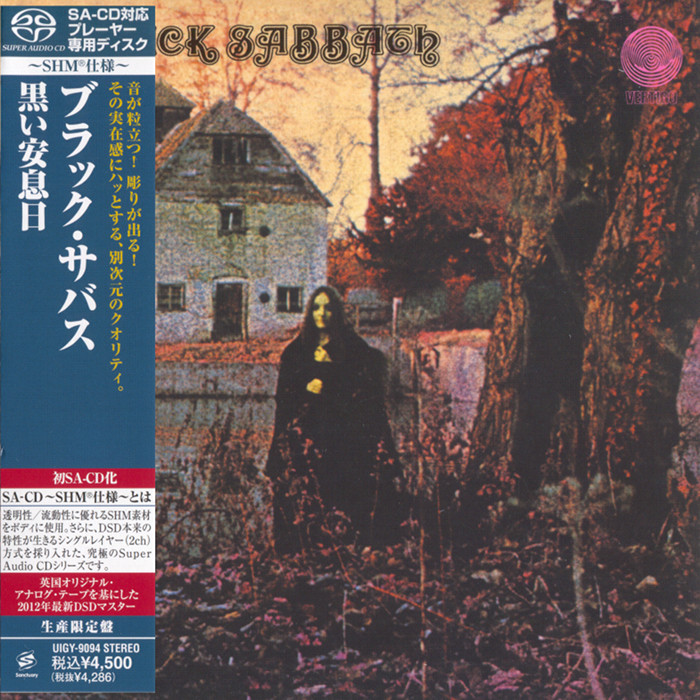 Uses 2012 DSD master based on the UK original analog tape. Reissue features the high-fidelity SHM-SACD format (fully compatible with standard SACD player, but it does not play on standard CD players). DSD Transferred by Richard Whittaker.

Black Sabbath’s debut album is the birth of heavy metal as we now know it. Compatriots like Blue Cheer, Led Zeppelin, and Deep Purple were already setting new standards for volume and heaviness in the realms of psychedelia, blues-rock, and prog rock. Yet of these metal pioneers, Sabbath are the only one whose sound today remains instantly recognizable as heavy metal, even after decades of evolution in the genre. Circumstance certainly played some role in the birth of this musical revolution — the sonic ugliness reflecting the bleak industrial nightmare of Birmingham; guitarist Tony Iommi’s loss of two fingertips, which required him to play slower and to slacken the strings by tuning his guitar down, thus creating Sabbath’s signature style. These qualities set the band apart, but they weren’t wholly why this debut album transcends its clear roots in blues-rock and psychedelia to become something more. Sabbath’s genius was finding the hidden malevolence in the blues, and then bludgeoning the listener over the head with it. Take the legendary album-opening title cut. The standard pentatonic blues scale always added the tritone, or flatted fifth, as the so-called “blues note”; Sabbath simply extracted it and came up with one of the simplest yet most definitive heavy metal riffs of all time. Thematically, most of heavy metal’s great lyrical obsessions are not only here, they’re all crammed onto side one. “Black Sabbath,” “The Wizard,” “Behind the Wall of Sleep,” and “N.I.B.” evoke visions of evil, paganism, and the occult as filtered through horror films and the writings of J.R.R. Tolkien, H.P. Lovecraft, and Dennis Wheatley. Even if the album ended here, it would still be essential listening. Unfortunately, much of side two is given over to loose blues-rock jamming learned through Cream, which plays squarely into the band’s limitations. For all his stylistic innovations and strengths as a composer, Iommi isn’t a hugely accomplished soloist. By the end of the murky, meandering, ten-minute cover of the Aynsley Dunbar Retaliation’s “Warning,” you can already hear him recycling some of the same simple blues licks he used on side one (plus, the word “warn” never even appears in the song, because Ozzy Osbourne misheard the original lyrics). (The British release included another cover, a version of Crow’s “Evil Woman” that doesn’t quite pack the muscle of the band’s originals; the American version substituted “Wicked World,” which is much preferred by fans.) But even if the seams are still showing on this quickly recorded document, Black Sabbath is nonetheless a revolutionary debut whose distinctive ideas merely await a bit more focus and development. Henceforth Black Sabbath would forge ahead with a vision that was wholly theirs.