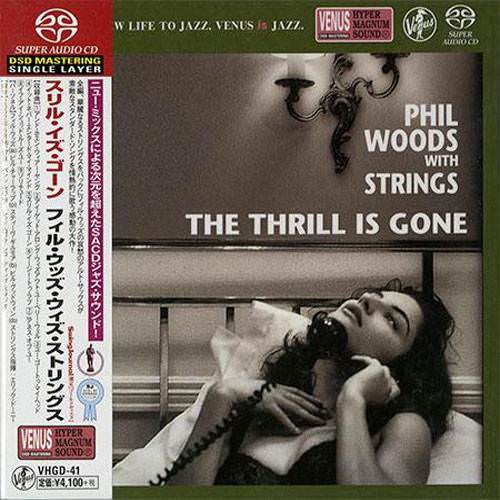 “Phil Woods with Strings?” you may ask with a bit of apprehension. An album with strings, which is inevitably heavily arranged, is always a risky proposition for a jazz musician whose art depends above all on spontaneous improvisation. But Phil Woods, arguably the best alto sax player alive today, has done it many times in his 55-year career. What distinguishes this album is the core group: Wood’s regular quartet featuring the young and brilliant pianist Bill Charlap. Also, they decided to go with a string quintet (two violins, two violas and one cello) instead of a larger string section. This probably worked to make the ensemble agile and more spontaneous. The first violinist even takes a few solos! Seven standard gems are sandwiched by two original compositions by Woods: “And When We’re Young” and “Solitude,” the latter of which is not to be confused with the more famous Duke Ellington tune. Frequent collaborator Bryin Lynch does not play his horn here but contributed a few arrangements. All in all, this is a charming album filled with many tender moments and nice sound. Woods’ playing is inspired and varied arrangements keep the program interesting. Bill Charlap helps his boss with a few beautiful solos as well.

Phil Woods is right at home during these 2002 sessions at Red Rock Recording Studio near his home in Delaware Water Gap, Pennsylvania. With his regular group (Bill Charlap, Steve Gilmore, and Bill Goodwin) minus trumpeter Brian Lynch, Woods adds strings conducted by his old friend Eric Doney on this collection of ballads. “And When We’re Young” is the alto saxophonist’s tribute to the late Senator Robert F. Kennedy, who was assassinated around the time it was written. The leader’s lush alto gives way to a brisk Latin-flavored passage featuring powerful solos by violinist Andy Stein and Charlap on piano, while Woods humorously detours into “Nature Boy” upon his return. The strings introduce a lively arrangement of “It Never Entered My Mind,” and another favorite of the alto saxophonist, “If I Should Lose You.” Unlike many jazz recordings with strings, they complement rather than overwhelm the musicians. But it is almost impossible for a Phil Woods-led date to turn out less than excellent.