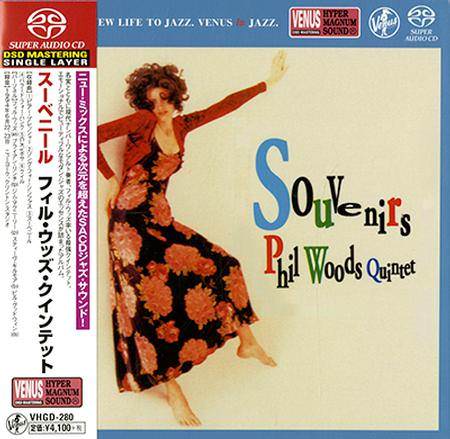 A die-hard bopper, alto saxophonist Phil Woods nonetheless manages to push the boundaries of straight-ahead hard bop on Souvenirs. As far as the ’90s go, this is one of Woods’ best. This version of Woods’ quintet, most notably featuring trumpeter Brian Lynch, is a solid entity with much forward momentum. Lynch, a member of Art Blakey’s last Jazz Messengers lineup, is easily one the best trumpeters around, displaying a knack for interesting note choices and lines that border on the progressive. Woods sounds thoroughly engaged throughout, attacking each tune with his characteristic fire.

Jazz alto saxophonist, clarinetist, bandleader, composer and four-time Grammy Award winner Phil Woods studied music with Lennie Tristano, who influenced him greatly, at the Manhattan School of Music and at the Juilliard School. His friend, Joe Lopes, coached him on clarinet as there was no saxophone major at Juilliard at the time. Although he did not copy Charlie “Bird” Parker, he was known as the New Bird, a nickname also given to other alto saxophone players such as Sonny Stitt and Cannonball Adderley. In the 1950s, Woods began to lead his own bands. Quincy Jones invited him to accompany Dizzy Gillespie on a world tour sponsored by the U.S. State Department. A few years later he toured Europe with Jones, and in 1962 he toured Russia with Benny Goodman. After moving to France in 1968, Woods led the European Rhythm Machine, a group which tended toward avant-garde jazz. He returned to the United States in 1972 and, after an unsuccessful attempt to establish an electronic group, he formed a quintet which was still performing, with some changes of personnel, in 2004. Woods earned the top alto sax player award almost 30 times in Downbeat magazine’s annual readers’ poll. His quintet was awarded the top small combo title several times. Perhaps his best known recorded work as a sideman is a pop piece, his alto sax solo on Billy Joel’s 1977 hit “Just the Way You Are”. He also played the alto sax solo on Steely Dan’s “Doctor Wu” from their 1975 album Katy Lied, as well as Paul Simon’s “Have a Good Time” from the 1975 album Still Crazy After All These Years.