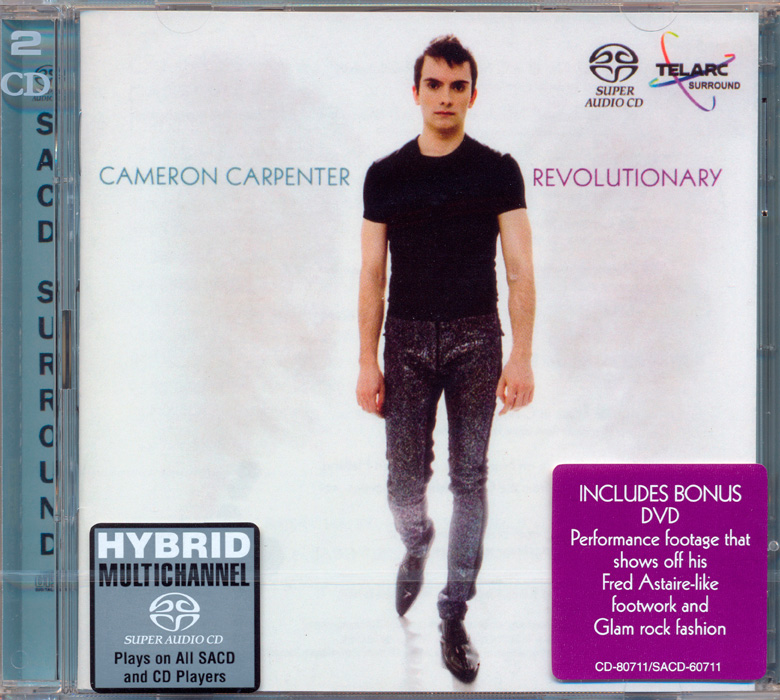 Cameron Carpenter has been lauded as “the Maverick organist”, “madly original”, and “a superstar of the 21st-century organ”. His debut recording, Revolutionary, showcases an artist who is not only breaking new ground, but who runs a musical gamut that any musician would be extremely hard-pressed to match. This album made Carpenter the first organist ever to receive a Grammy nomination in the category ‘Best Solo Instrumental Performance’ (without orchestra) for a solo album.

Revolutionary showcases an artist who is not only breaking ground, but who runs a musical gamut that any musician would be extremely hard-pressed to match. There are only four organ works included. Three are major pinnacles of the organ repertoire (the blistering, nearly unplayable Etude in Octaves by the French modernist Jeanne Demessieux; Prelude and Fugue in B major by Marcel Dupré; and Bach’s deeply moving chorale-prelude Now Come, Savior of the Gentiles, while the fourth is the world premiere recording of Cameron’s suggestive Love Song No. 1 (2008). The album’s major departures, though, are found in Duke Ellington’s Solitude (wittily combined with Bach’s Sheep May Safely Graze); Liszt’s Mephisto Waltz, and Vladimir Horowitz’ Carmen Variations. Here are two of Chopin’s Études in versions so convincing that they might have been organ music; and Cameron’s Evolutionary Toccata and Fugue in D Minor, an outrageous survey of the various instrumental arrangements that made Bach’s work famous. All this is recorded not on a pipe organ, but on the equally revolutionary Marshall & Ogletree Virtual Pipe Organ at Trinity Church Wall Street in New York City – an organ that, rising out of the destruction of Trinity’s pipe organ on September 11, 2001, continues to challenge the status quo of the pipe organ and the artistic possibilities of organ playing in general.