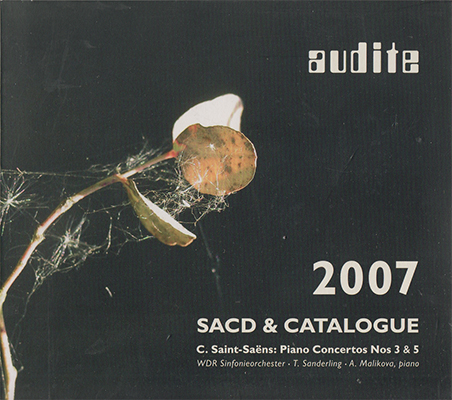 The five piano concertos of St.-Saens are not frequently heard and that is a shame in view of the endless repeats of the Tchaikovsky, Grieg and Schumann warhorses. They are all well-composed examples of the best of French instrumental music of the later 19th century and full of lovely melodies that would appeal greatly to concert audiences. I hadn’t enjoyed any of them for some time and it was a pleasure to have these two concertos in enveloping hi-res surround. I don’t know how we missed out on Vol. I but plan to check into that.

Brian Bloom talks in his Denon receiver review this issue about the people who often prefer the stereo mix on SACDs to the multichannel. I admit I seldom check either the CD or stereo options anymore because I always hear about the same thing in comparison. I really can’t imagine why anyone with five properly matched and located speakers would prefer the stereo mix to the multichannel mix! On these concertos the two-channel option is excellent and there is little one would miss. However, when switching to the multichannel option the soundstage takes on a depth and breadth it didn’t have, and the piano is better separated from the sound of the orchestra. There’s much more “air” around everything. The piano still sounds too wide but that’s a given.

The first movement of the Third Concerto is so bombastic one might almost think the composer was humorously depicting a lion or elephant from his Carnival of the Animals. It’s slow movement is rather brooding, but the finale is a colorful showpiece for the soloist. The Fifth Concerto is sometimes subtitled “Egyptian Concerto” because that is where it was composed. St.-Saens frequently spent time in North Africa, which had started when he was a child with a medical problems. He indicated the middle movement was a sort of tour of the Orient. One theme in it is a Nubian love song which the composer had heard boatmen on the Nile sing. The opening and closing movements are however thoroughly French. Orchestration is very colorful, with solos originating in the winds and strings. 4/5 ~audiophile-audition

Note:
The basic issues concerning the recording of classical music remained unchanged for several decades. The first problem to be considered and solved was the inadequate quality of sound reproduction, but soon those involved ceased to be hampered by the limitations of recording techniques and were fully able to realize their own conceptions of how they wanted the music to sound.

The leap from CD stereo to SACD Surround Sound represented another significant step forward. These newly emerging media will, however, be unable to effect any further relevant improvements. Their advantages are only seen to the full in the context of video productions. Those of us who prefer not to be distracted by pictures do not profit from these technical progress.

So don’t let yourself to be confused by the daily advertisements for new formats! The basic issues concerning the presentation and recording of music are no longer determined by the medium, but only by the way performers and producers want the music to sound.

audite does not intend to join the race for new formats; it will continue to work with SACD. Ludger Böckenhoff