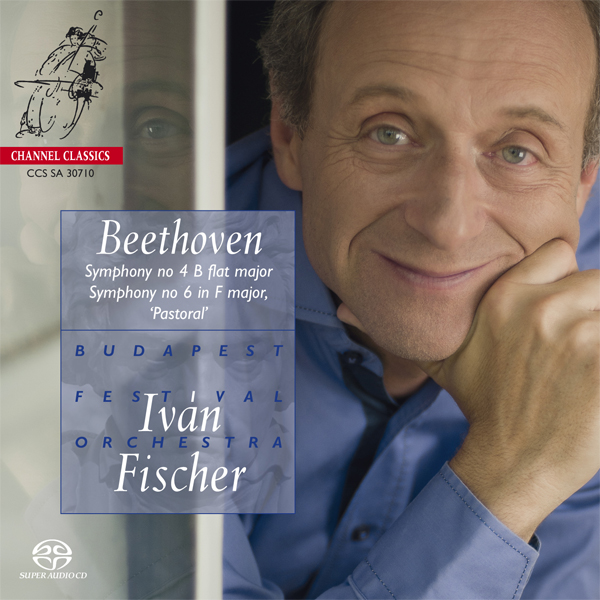 ‘Two fundamentally different symphonies: both works explore feelings from an entirely different point of view. The Fourth is about human feelings and moods: obsession, love (what a melody in the second movement!), happiness, fun, wit, (Beethoven’s most humorous finale!). The Sixth is about feelings that nature awakens in us: calmness, meditation, thankfulness. It has been an especially creative process to work on these masterpieces. We discovered that the Fourth Symphony sounds better with natural horns and trumpets. In the Pastorale we used a different seating arrangement, with the winds scattered among the strings, so that each soloist was surrounded by musicians playing the flow of Beethoven’s nature music. After the storm, when we hear the first tentative call of the clarinet, answered by the horn from a different mountain, as it were, we found it appropriate to use a solo violin, which is gradually joined by the whole orchestra.’ –Iván Fischer

Occasionally a disc comes along that is exemplary in every respect, so let me simply say that this recording was a pleasure to audition. Iván Fischer fully achieves what Jan Willem de Vriend is only partially successful at communicating in an identical program (his disc is reviewed below). The performers on both discs employ natural horns and trumpets within a modern symphony structure, so the comparison is even more apposite.
In the performance of the Fourth Symphony, Fischer captures all of the variety of mood—mystery, melancholy, swagger, and humor—that this fascinating score can project. There is real joy in this music, and Fischer and his orchestra revel in it; by contrast, the second movement possesses a noble character characteristic of the best performances of this work. The sound is full-bodied and has terrific bass, with the kind of presence only rarely achieved in the studio.

In his rendition of the Sixth, Fischer interpolates a couple of innovations. He seats the winds among the strings “so that each soloist was surrounded by musicians playing the flow of Beethoven’s nature music,” according to the conductor. This would seem to be well within his prerogative, as is the seating of the violins, which are placed antiphonally. The placement of the winds allows for extra clarity, though in the peasant dance, the exuberant strings occasionally swallow them up (the piccolo being the most obvious casualty). Fischer, however, also gives the first phrase of the principal theme of the last movement to a solo violin. I find this to be quite effective, a lone voice emerging from shelter as the storm passes; purists may feel otherwise.
Fischer has a similar attitude toward tempos, which are quite flexible. The second movement is leisurely indeed, but the molto mosso indication is very much in evidence, as the music never drags. The finale is also taken at a slower speed than on some recent recordings: The timing of 10:58 is almost three minutes longer than Järvi’s fleet pace, for one example, but here again, the music never feels merely slow, as the intensity of the playing radiates a profound sense of gratitude.

It is unusual, to say the least, to find a disc that sounds this fresh in repertoire this familiar, but Fischer and his Budapest band have a knack for doing just that. I wasn’t as taken with the Beethoven Seventh by these forces (reviewed in Fanfare 32:2), but I have no reservations about this new disc, which receives my highest recommendation. –Christopher Abbot, FANFARE