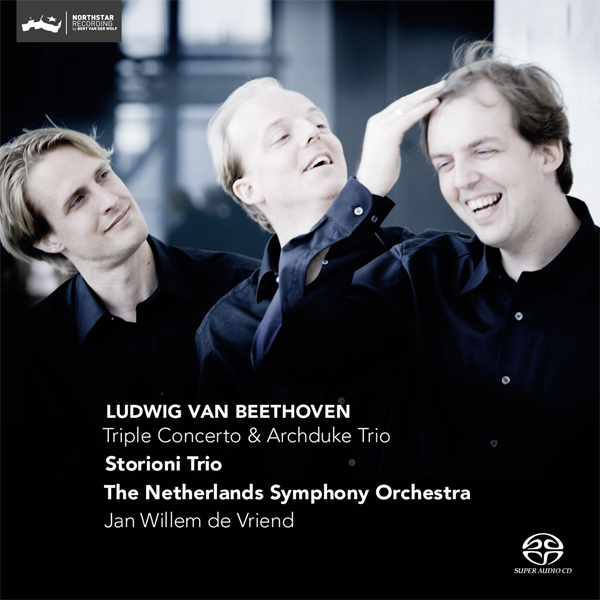 The piano trio was the ensemble type with which Beethoven opened his series of works published with opus numbers in Vienna in 1795. In his Triple Concerto, published as Opus 56, Beethoven confronts this genre with a large orchestra. Anton Schindler, since 1822 Beethoven’s self-named secretary and also his first, sadly all too often untrustworthy biographer, stated that the piano part of the trio instrumentation was specified for Archduke Rudolf; but the facts do not support this. The Archduke was only sixteen years young when the work was written around 1804, a year marked by the composition of the Third and Fifth Symphonies, Fidelio and the “Appassionata”, and when the Triple Concerto was put to print in 1807 the piece was dedicated not to a schoolboy from the Imperial House, but to another member of the high nobility and confidant of the composer, Prince Lobkowitz.

Recordings of Beethoven’s Triple Concerto, Op. 56, by a piano trio rather than by a group of virtuosi (a configuration that almost always misunderstands the work) are not abundant. Still rarer are those like the present release by the Storioni Trio, a Dutch group that takes its name from the maker of the 1790s instrument played by the violinist (and strung, like the viola, with gut strings). Pianist Bart van de Roer plays an 1815 Lagasse fortepiano. This recording is part of a series devoted to Beethoven’s piano trios, but the Triple Concerto actually is more comfortable in those surroundings than when forced to keep company with the likes of the Violin Concerto in D major, Op. 61. The entire texture is lighter than in the big virtuoso concertos, and this performance is especially good at bringing out the work’s playful nature, with the thematic material of the opening movement batted around among the soloists, and between soloists and orchestra, in unpredictable ways. One might wish for a bit more rhythm in the finale, marked Rondo alla polacca by Beethoven and perhaps, during that politically engaged phase of his life, intended as an expression of support for a small country overrun by the warring powers of Europe. In the Piano Trio in B flat major, Op. 97 (“Archduke”), by contrast, the players deliver punchy rhythms that lose some of the warm lyricism of the music. The light textures of the instruments again, however, will reveal many new details even to listeners who think they know the music well. Challenge Classics, working in the Muziekcentrum Enschede for the Triple Concerto, delivers superb acoustic results; the trio recording, in the Haarlem Lutheran Church, is too spacious and distant, but the definition of the music-making remains clear. –AllMusic Review by James Manheim