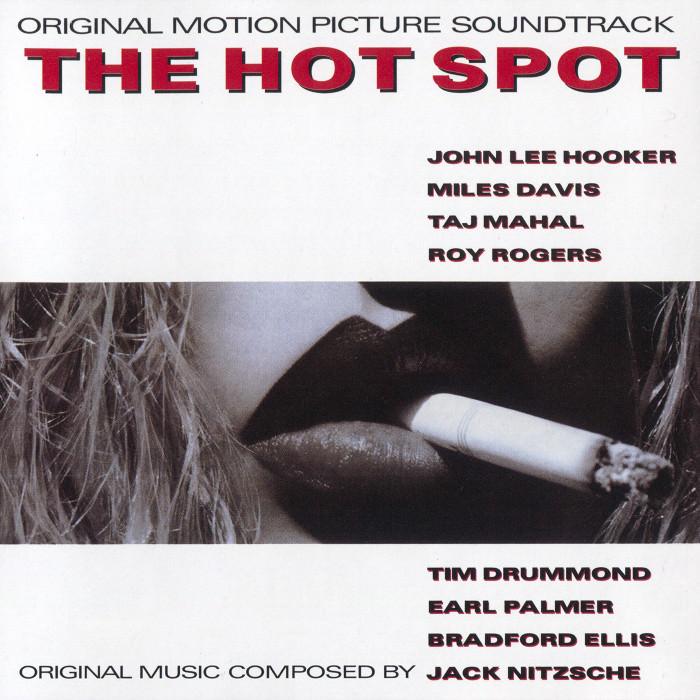 An amalgamation of swampy blues, jazz and rock – all mixed and recorded in a sparse, bloomy and eerie sort of way. This recording is just so damn fine, so airy and warm. And the musician’s aboard on this Dennis Hopper film are a who’s who, including Miles Davis, John Lee Hooker, Taj Mahal, Roy Rodgers, Earl Palmer and Tim Drummond. This has long been a highly sought after and collectible album among audiophiles. A true demonstration record.

A return look and listen to this historical and breathtaking collaboration between two of the great figures of modern music should naturally be prefaced by a few key facts. Although this album presents itself as the soundtrack to the film The Hot Spot, like many such releases it bares little relation to the music that was actually used in the film – not that much of this music was actually used. All one really needs to know about the film itself, other than the fact that it was directed by Dennis Hopper, is that it is awful, even by bad film standards. That it was the impetus for this marvelous music to be made is something listeners should be thankful for, particularly fans of either Miles Davis or John Lee Hooker. Anyone who grew up with the former artist during his electric transfusions of the ’60s and ’70s probably wondered why he wasn’t playing with John Lee Hooker the whole time, since they both seemed headed in the same direction. In fact, one wonders why it took this crummy film and the personal appeal of its director to bring these two musical giants together. That they didn’t seek to do something like this on their own can be looked at as a character flaw, one that can only be forgiven after listening to how wonderfully they interact here. An important aspect of the magic is their individual genius in the art of playing blues music in such utterly personal ways. There is no mistaking the sound of either Hooker or Davis for anyone else, with layer upon layer of detail backing that up – the actual sound of their instruments is distinctive, their choices of notes and timing completely unusual and impossible to imitate, and they both have a knack for casually making even the most basic sort of band track sound as if it is a style of music that has never been played before. No matter how many times one may have heard a bar band break into what they think is a Hooker boogie, a brief recovery period will still be required after first exposure to the tracks here. Often during his recording career, Hooker was able to get a particularly scintillating rhythm section sound going with whatever pros had been assembled for the occasion. This is one of these sessions, but it indeed makes it seem like a royal visit to have Davis blowing over the top of these grooves. There are other dignitaries as well. Blues guitarist Roy Rogers adds some tasteful slide guitar, and it could be said that it presents another melodic direction for the interaction. But when one has a choice to hear Hooker or Davis instead, most listeners will simply wish Rogers had ridden off into the sunset on his faithful horse instead of coming to this session. Taj Mahal, on the other hand, adds nice textures with his dobro, an instrument that is wonderfully versatile yet so often overlooked in anything other than bluegrass music or straight-ahead country blues. The latter genre, unfortunately, has too much of a sway over this performer’s choice of picking patterns. He sounds like what he is: a revivalist who learned how to play blues in college. The rhythm section kicks the whole time, while composer and arranger Jack Nitzsche makes valuable contributions of his own. This includes a minor-key groove – completely unusual for Hooker, who perhaps recorded in a minor key less than a half-dozen times in his entire career. The dabs of typical film score-type music seem like nothing special until there is an entrance by Davis. These sections of him extemporizing over such routine music bring to mind one of the Ralph J. Gleason profiles of Davis, which described the artist hanging out in his music room playing along with various new releases and painfully trying to reharmonize several selections from the score of Dr. Doolittle he was thinking about recording. The image is that of normal music being twisted into something different by a master at such trickery; most of The Hot Spot soundtrack, on the other hand, presents this great jazz soloist playing over blues grooves as pure as only Hooker could make happen, an interesting contrast to some of the weaker, late-period Davis, where his bands are simply straining to be funky in an old-time bluesy way. To say this is the best recording Davis made in his final period might be misunderstood as damning with faint praise. A more solid compliment would be to contrast it with other great moments from the trumpeter’s career, such as Bitches Brew or Kind of Blue, and the best parts of this soundtrack contain music that is every bit as interesting and profound. As for a Hooker album, there might be others that have better blues songs on them, but this is just about the only recording the bluesman ever did with a really great jazz soloist on it.