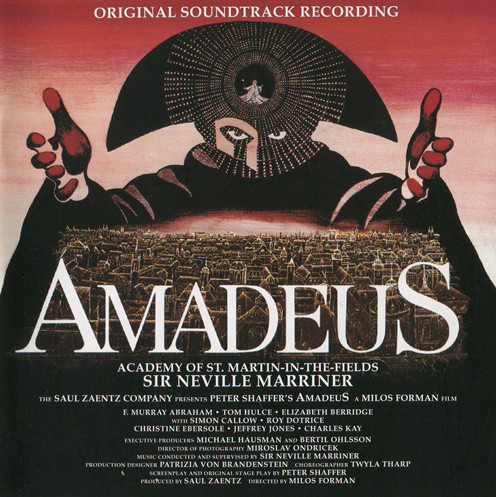 A masterpiece of moviemaking that won eight Academy Awards, Amadeus is one of the few films about music that presents it with absolute fidelity to its maker’s intentions. When producer Saul Zaentz, director Milos Forman, and writer Peter Shaffer asked Sir Neville Marriner to conduct for tlie 1984 film, he told them yes, “Under one condition, that not one note of Mozart would be changed”.

Marriner’s stipulation was honored with such integrity, Forman declared that the music became the picture’s third character, after Wolfgang Amadeus Mozart and Antonio Salierl Marriner disagreed. He said that it was “possibly the first film that has music as its leading character”. Critics were as enthusiastic about the motion picture as were audiences. The soundtrack recording—a generous sampling of Mozart’s genius—stood on its own because of the brilliance of Marriner fs conducting and the performance of the Academy of St. Martin-in-the-Fields. “So many people,” he said, “were introduced to Mozart as a composer compared with what would have happened if we’d just done it in concert halls. It would have taken us a hundred years to reach as many people as the film readied”. Now, in the glory of sound made possible by Super Audio Compact Disc (SA-CD) technology, Mozart’s music reaches new generations of listeners.