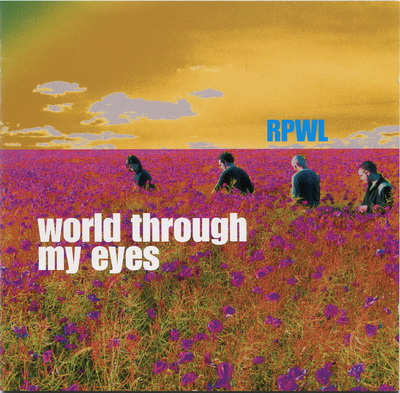 RPWL (taken from the first letter of the surname of each of the original band members) started life in 1997 as a Pink Floyd cover band, but quickly found their own sound and their own place in the progrssive rock/symphonic rock arena. ‘World Through My Eyes’ is their fourth studio album follwing on from ‘God Has Failed’ (2000), ‘Trying to Kiss the Sun’ (2002) and ‘Stock’ (2003) and firmly establishes them, alongside Sylvan, as one of Germany’s most important prog bands writing music at the moment.
‘World Through My Eyes’ clearly shows its origins in the sound of Pink Floyd; more interestingly the rhythms and melodies on this album also shows the clear influence of the Beatles. The mixture creates a unique sound: new drummer Manfred Mueller provides a stable and sometimes ‘bluesy’ beat to magnificently moody vocals and punchy, captivating guitar overlays. Two tracks show a heavy Hindu influence in terms of sound and atmosphere – and this, combined with some distinctly 70’s psychedelic background work is the clearest indication of a Beatles homage being paid.Throughout the album, there is a continual interplay of a variety of differing instruments which all feed in to the creative dynamism of the beat and the melodies.
Nevertheless, the sound is distinctively their own. The lyrics take a while to actually sink in. Unlike the upbeat pace of the music they are more reflective, carefully chosen and sometimes stand at a counter-point to the pace and force of the music. It will take two or three listens at least before the significance of what is being said starts to sink in. Taken in combination with the clean, crisp mixing of the instruments and the perfect production values applied to the recording as a whole, then we left with a disc and a record which is bright, melodic, rocky and a joy to listen to time and time again. This is worth every penny: and we can only hope their forthcoming studio album ‘9’ will continue the exceptionally high standards set down in this album.

When RPWL singer Yogi Lang says (in the liner notes) that “the world depends on our ideals and moral concepts, and so it finally depends on our mental development,” one can only hope that the “we” he’s referring to is humanity in general, not his band specifically. (One also rather wishes that he’d clarify that bit about equating mental development with morality — is the problem with tyrants and rapists that they aren’t sufficiently smart?) That said, his band certainly is smart, and its music is a pleasing — if frequently longwinded — combination of hooks-wise pop songcraft and expansive sonic ideas. The lyrics are a bit heavy on woolly headed, whoa-dude philosophizing (sample line: “If the world is one big plan, why must we lose our innocence?”), but the pop-smart, almost Beatlesque structure of “Start the Fire” and the tight, muscular “Roses” can go a long way toward making lines like those go down easy. Ditto the absolutely gorgeous chorus of “Sea-Nature,” which would be a completely brilliant song if it were fewer than eight minutes long. “Sleep” also avoids greatness just barely, mostly by bringing in faux sitar and rudimentary slide playing. Those who are leery of the new prog rock may not be converted by this fine album, but those already so inclined will love it immediately.