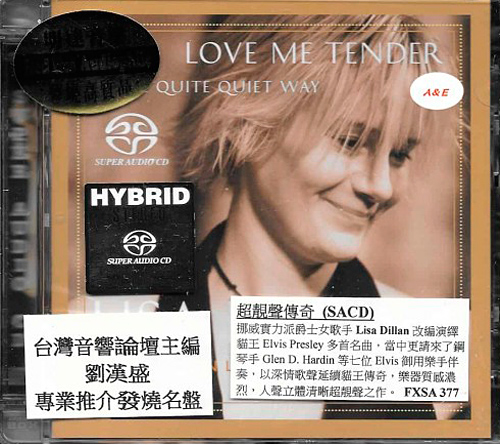 Norwegian jazz vocalist Lisa Dillan brings a sensual quiet reverence to songs sung by the King of Rock, Elvis Presley, including “You Don’t Have To Say You Love Me”, “Heartbreak Hotel” and more.

Lisa Dillan is an improvising singer, composer and performing artist. She has worked with several leading pop, jazz, and improvisation musicians and dancers home and abroad, touring in Russia, China, USA, Europe and Scandinavia with her solo concerts and bands. In 2011, Lisa was introduced to Elvis Presley’s band leader from 1969 – 1977, James Burton, and current member of the TCB Band, Paul Leim. This lead to an invitation to Nashville to do the recording “Love Me Tender”, released in 2012. Seven of Elvis Presley’s most trusted live and studio musicians perform on this record, togehter with two more from the ranks of American pop history’s elite. These are world class musicians who have accompanied many of the greats of pop music: From Elvis Presley, Dolly Parton, Frank Sinatra and Bob Dylan, to Joe Cocker, Lionel Richie, Emmylou Harris, Joan Baez, Buffy Saint Marie, etc.

In this project Lisa Dillan has selected her favorite songs from the repertoire of Elvis Presley. These are strong, beautiful and expressive melodies and lyrics. Most of them are, nevertheless, unknown for most people. Elvis had a particular talent for finding good song material, and there are many hidden gems in his large production. Lisa Dillan has been a fan of Elvis since 1977, the year Elvis passed away, and she has detailed knowledge of his career and, not least, his repertoire. In 2003 she began carefully sifting through his repertoire, and the songs on this album revolve, to a large degree, around the ballads he did in the ’70s. She has concentrated on finding songs that fit into the framework she wanted, simplifiying and distilling the power in these songs – hence “Quite Quiet”. In 2007 Lisa met Asbjørn Lerheim on a deserted island in the far north of Norway. The silence, the timing and the dedication to details were meeting points for these two musicians, and quite soon Asbjørn became the second member of the Quite Quiet Project.