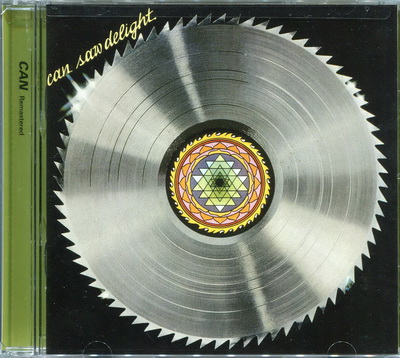 Bearing bar none the worst title pun of any Can album — and with titles like Cannibalism, that’s saying something — 1977’s Saw Delight was the German progressive group’s farewell. Clearly, the core quartet had found themselves in a rut by the recording of this album, bringing in percussionist Reebop Kwaku Baah and bassist Rosko Gee from a late-era lineup of Traffic to add a sort of Afro-Cuban jazz feel to their sound. What’s frustrating is that this idea could have worked brilliantly, but the execution is all wrong. Instead of the polyrhythmic fireworks expected from a drum duel between Baah and the African-influenced Jaki Liebezeit, Can’s senior drummer basically rolls over, keeping time with simple beats while the percussionist takes on the hard work. Similarly, Rosko Gee’s handling of the bass duties (which he performs superbly throughout, adding an almost Mingus-like rhythmic intensity to even the loosest songs) frees Holger Czukay to add electronics and sound effects to the proceedings, an opportunity he doesn’t make much of. On the up side, the opening “Don’t Say No” recalls the controlled fury of earlier tunes like “Moonshake,” and side two, consisting of Gee’s lengthy, jazz-based composition “Animal Waves” and the lovely instrumental “Fly by Night,” is largely excellent, but the two lengthy tracks that close side one are melodically and rhythmically pale in comparison, and there’s a tired, somewhat dispirited vibe to the whole album that makes it an unsatisfying send-off to Can’s career.