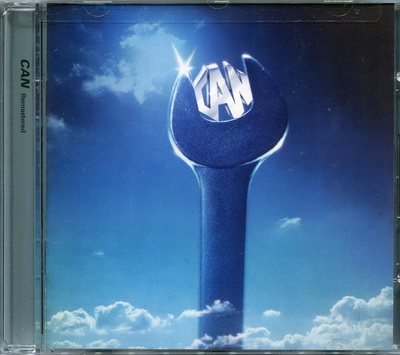 The final studio effort from the first decade run of Can signifies not only a changing of the guard for the progressive Krautrock icons, but a nod to the shifting tastes of the times. Losing the great bassist Holger Czukay as a bandmember who moved into the production/editing room had a telling effect, but his replacement Rosko Gee was more than adequate. Percussionist Rebop Kwaku Baah and Gee (both coming off stints with Traffic) buoyed the band and modified Can’s sound as they collectively continued exploring amplified and processed experimentation. Electric guitarist Michael Karoli continued expanding his horizons and sound palette, Irmin Schmidt dug deeper into keyboard sounds running parallel to fellow countrymen from the bands Passport, Cluster, and Kraftwerk, while Jaki Liebezeit, simply put, remained one of the more consistent and steady rock drummers of the era. But disco beats, on the way out in 1979, remained a part of Can’s appeal, and a precursor for the acid jazz dance music to come. At their best, “All Gates Open” whips space blues harmonica, buried vocals, and Robert Fripp-inspired guitar into a clean and simple jam. The exotic influence of African music infused into the instrumental “Sunday Jam” suggests strains of the famous jazz standard “Caravan.” The purely electric “Sodom” resonates along the lines of Cluster welded to Jimi Hendrix-style inferences, while also plodding. A campy take of the can can “Ethnological Forger Series #99” parallels the Love Sculpture/Dave Edmunds adaptation of “Sabre Dance.” Of the more dance-oriented tracks, “A Spectacle” is relevant from a contemporary standpoint with Karoli’s spiky, choppy wah-wah sound, while “Safe” is completely spaced out. A scintillating attempt at R&B fusion, “Can Be” veers into epic big hair arena corpo-rock territory, held together by Karoli’s excellent playing. While Can emerged in ensuing years with different lineups and further sub-developments, this last vestige of the initial band holds firm in resolve, and is at the least an intriguing aside to their more potent earlier albums.