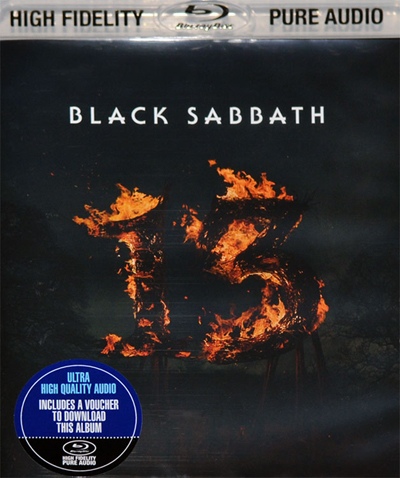 13 is the 19th studio album by British rock band Black Sabbath. The album was released on 10 June 2013 in Europe and 11 June 2013 in North America, via Vertigo Records and Republic Records in the US, and via Vertigo Records worldwide. It is the first studio album released by Black Sabbath since Forbidden (1995), and their first studio recording with original singer Ozzy Osbourne and bassist Geezer Butler since the live album Reunion (1998), which contained two new studio tracks. It is also the first studio album with Osbourne since Never Say Die! (1978), and with Butler since Cross Purposes (1994). This is also the first Black Sabbath studio album since Never Say Die! not to feature longtime keyboardist Geoff Nicholls, and the first since The Eternal Idol (1987) on Vertigo (outside the US and Canada).
Black Sabbath’s original line-up first began work on a new studio album in 2001 with producer Rick Rubin. The album’s development was delayed because Osbourne was in the middle of finishing his eighth solo album Down to Earth, and the rest of the band members eventually went on to pursue other projects, including GZR and Heaven & Hell. When Black Sabbath announced the end of their hiatus on 11 November 2011, the band announced that they would restart work on a new album with Rubin. In addition to original members Osbourne, Butler and guitarist Tony Iommi, they were joined at the recording sessions by drummer Brad Wilk, of Rage Against the Machine and Audioslave, following original drummer Bill Ward’s decision to not participate in the reunion, due to a “contractual dispute”.

There’s a lot of pressure involved with being the rulers of the underworld, and nobody knows it better than Black Sabbath in 2013. Inarguable legends and at least partially responsible for creating heavy metal as we know it with their classic ’70s material, Sabbath have spawned generations of followers and become one of the final words of the genre. There have been countless reunions and mutations of the band following vocalist Ozzy Osbourne’s first dismissal in 1978, and even 13 doesn’t quite deliver on fans’ decades-long desires to see all four original members back together. Original drummer Bill Ward sits the record out due to disputes over the recording contract, with Audioslave/Rage Against the Machine drummer Brad Wilk providing beats in his stead. Despite this considerable absence, 13 comes closest to recapturing the desperate feel, plodding grooves, and unparalleled metal magic of those first classic Sabbath records than anything the members of the band have done since, in any permutation or combination. Kicking off with two sludgy tracks, each over eight-minutes long, the Rick Rubin-produced 13 takes a few moments to get its legs. Once warmed up, however, each element falls somewhere between studied re-creation of the past and logical progression, be it Tony Iommi’s spooky guitar tone, Ozzy’s nasal howl, or the panic attack dynamics and sense of nuclear dread that made the moods of Sabotage and Vol. 4 so thick. Sharp tempo changes and caustic drop-tuned blues metal riffs make up tracks like “God Is Dead?” and the doomy “Age of Reason.” Many of the album’s eight tracks stretch past the seven-minute mark, full of heavy compositional shifting. The mellower acoustic track “Zeitgeist” rewrites the spacy “Planet Caravan” from second album Paranoid, revisiting the same cosmic motif of that song, complete with Iommi’s most Django Reinhardt-influenced soloing. The lyrics, all penned by bassist Geezer Butler, are focused on internal religious and mental conflicts, with final track “Dear Father” tackling living with memories of abuse. The album is heavier, more precise, and more interesting than the past several decades of output from the bandmembers would suggest. Without fully replicating the energy of their untouchable first six records, Sabbath have risen to the unique challenge of not becoming self-caricatures, turning in something new while still reactivating the strengths of their younger days. The backwards-looking tendencies of 13 are something the band is fully aware of, as signified by the reappearance of rain and church bells sound effects on the last track, the same sounds that opened their first album in 1970. The influence of early Sabbath has become so omnipresent that it’s come back to influence its very creators four decades later, but the results are unexpectedly brilliant, apocalyptic, and essential for any die-hard metal fan. –Fred Thomas