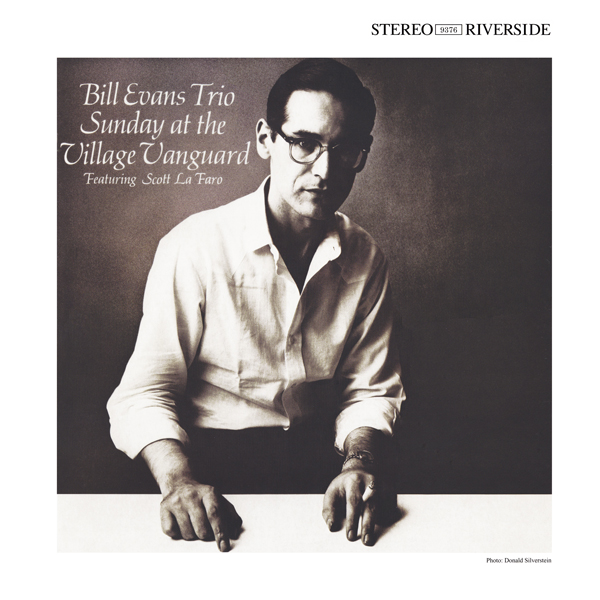 Few albums in the history of contemporary American music can be more deserving than this one of the designation Original Jazz Classic. It is the first of two Riverside albums derived from the legendary final appearance of the first Bill Evans trio – taped during the last day of a Village Vanguard engagement, barely ten days before the tragic death of bassist Scott LaFaro. The recordings have long been recognized as capturing the essence of the unique three-way interaction that characterized the trio. This album is further distinguished by its emphasis on the solo work and compositions of the innovative LaFaro.

Sunday at the Village Vanguard is the initial volume of a mammoth recording session by the Bill Evans Trio, from June 25, 1961 at New York’s Village Vanguard documenting Evans’ first trio with bassist Scott LaFaro and drummer Paul Motian. Its companion volume is Waltz for Debby. This trio is still widely regarded as his finest, largely because of the symbiotic interplay between its members. Tragically, LaFaro was killed in an automobile accident ten days after this session was recorded, and Evans assembled the two packages a few months afterward. While “Waltz for Debby” — in retrospect — is seemingly a showcase for Evans’ brilliant, subtle, and wide-ranging pianism, this volume becomes an homage, largely, to the genius and contribution of LaFaro. That said, however, this were never the point. According to Motian, when Evans built this trio based on live gigs at the Basin Street East, the intention was always to develop a complete interactive trio experience. At the time, this was an unheard of notion, since piano trios were largely designed to showcase the prowess of the front line soloist with rhythmic accompaniment. Here, one need listen no further than the elegant and haunting, graceful modal reading of “My Man’s Gone Now” from Porgy & Bess to know that there is something completely balanced and indescribably beautiful in their approach. Motian’s brushes whisper along the ride cymbals and both Evans and LaFaro enter into a dialogue that emerges from a darkly hued minor mode, into the melody and somehow beyond it, into a form of seamless dialogic improvisation to know that in the act of one musician slipping over and under another — as happens with all three in an aural basket weave — is something utterly new and different, often imitated but never replicated. But in a sense it happens before this, on LaFaro’s “Gloria’s Step,” which opens the recording. His thematic statement includes the briefest intro, hesitant and spacious before he and pianist enter into a harmonic and contrapuntal conversation underscored by the hushed dynamics of Motian’s snare, and the lightning-fast interlocutions of single string and chorded playing of LaFaro. The shapshifting reading of Miles Davis’ “Solar,” is a place where angularity, counterpoint, and early modalism all come together in a knotty and insistent, yet utterly seamless blend of post-bop aesthetics and expanded harmonic intercourse with Motian, whose work, while indispensable in the balance of the trio, comes more into play here, and is more assertive with his half-time accents to frame the counterpoint playing of Evans and LaFaro. This is a great place to begin with Evans. –Thom Jurek