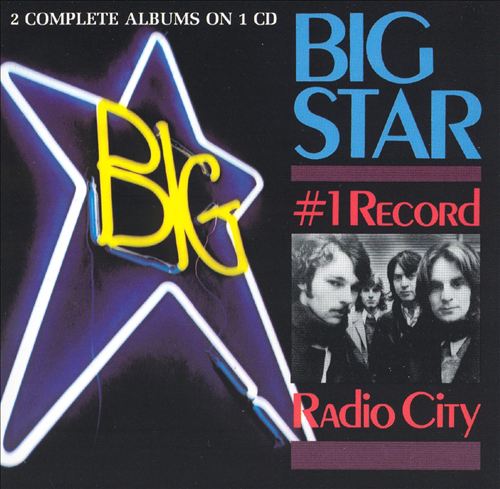 The quintessential American power pop band, Big Star remains one of the most mythic and influential cult acts in all of rock & roll. Originally led by the singing and songwriting duo of Alex Chilton and Chris Bell, the Memphis-based group fused the strongest elements of the British Invasion era — the melodic invention of the Beatles, the whiplash guitars of the Who, and the radiant harmonies of the Byrds — into a ramshackle but poignantly beautiful sound which recaptured the spirit of pop’s past even as it pointed the way toward the music’s future. Although creative tensions, haphazard distribution, and marketplace indifference conspired to ensure Big Star’s brief existence and commercial failure, the group’s three studio albums nevertheless remain unqualified classics, and their impact on subsequent generations of indie bands on both sides of the Atlantic is surpassed only by that of the Velvet Underground.

A two-fer combining Big Star’s first and second albums, #1 Record/Radio City remains a definitive document of early-’70s American power pop and a virtual blueprint for much of the finest alternative rock that came after it. The lone Big Star record to merit the full participation of founder Chris Bell, the brightly produced #1 Record splits the songwriting credits evenly between him and Alex Chilton (in the tradition of Lennon-McCartney). But from the beginning, the group is tearing apart at the seams: Bell and Chilton’s relationship seems less a working partnership than a battle of wills, and each possesses his own distinctive vision. The purist, Bell crafts electrifying and melodic classic pop like “Feel” and “In the Street,” while Chilton, the malcontent, pens luminous, melancholy ballads like “The Ballad of El Goodo” and “Thirteen.” Ultimately, their tension makes #1 Record brilliant. However, Radio City shifts gears dramatically: Bell is largely absent (though he guests, uncredited, on a few tracks, including the wonderful “Back of a Car”), allowing Chilton’s darker impulses free reign. From the raucous opener “O My Soul” onward, the new Big Star is noisier, edgier, and even more potent. Erratic mixing, spotty production, shaky performances — by all rights, Radio City should be a failure, yet Chilton is at his best when poised on the brink of disaster, and the songs hang together seemingly on faith and conviction alone. Each track recalls pop’s glory days, from the Kinks-ish snarl of “Mod Lang” to the Byrds-like guitar glow that adorns “Way Out West.” The much-celebrated “September Gurls” is indeed a classic — everything right and good about pop music distilled down to three minutes of pure genius.