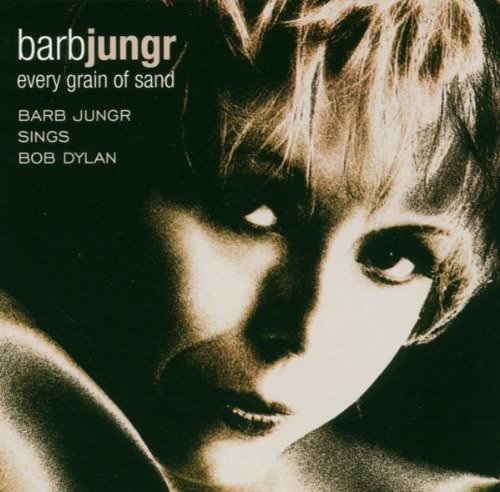 The cult classic album of song-styled material from the Bob Dylan songbook. Barb Jungr’s first album of Bob Dylan songs has deservedly become known as a cult classic and has won her a dedicated fan base around the world. The album even has celebrity fans, with Jeremy Irons naming it as one of the must-have albums on BBC Radio 4’s Desert Island Discs.

Every Grain of Sand is a breathtaking revelation on several fronts. First, Barb Jungr treats Bob Dylan as one of the great tunesmiths of the American popular tradition. Not merely as rock & roll’s preeminent songwriter, the direction from which virtually all others have approached his canon, but as a sophisticated composer the equal of the Gershwins, Irving Berlin, Jerome Kern, or Cole Porter. Jungr dramatically re-reads that canon and she fearlessly reshapes it in the process. To cite the most radical instances, she turns “Things Have Changed” into an Eastern European jig and “Tangled up in Blue” into a jaunty, jazzy western, while “Born in Time” is a marvel full of Baroque voicings. One may quibble – and Dylan fanatics, known to be provincial on occasion, certainly will, perhaps vociferously – with an arrangement here or a lyrical interpretation or subtle shading there without – and here is the magic of the album – in the least invalidating the singer’s choices. Indeed, part of the sublime beauty of Every Grain of Sand is that it inspires, even challenges, one to make personal revisions and reinterpretations. Ultimately, Jungr is one of the few artists who has managed to not only come out on the other side of this songbook unscathed, but to actually come out having enhanced its gravity, significance, and unvarnished beauty as well as her own. She is not merely singing, but telling stories. She opens up a window of vulnerability and sensuality that had previously sat stoic beneath the surface of these songs and suffuses them with such a delicate, gauzy luminosity that they seem to glow from the inside out. Her singing is soulful and emotionally naked, and the performances are so expressive that you take something new away with each listen. The treasures (“I’ll Be Your Baby Tonight,” “Ring Them Bells,” “Not Dark Yet,” “Is Your Love in Vain?,” and “What Good Am I?”) tucked away here are endlessly rewarding. If you think you’ve heard Bob Dylan – or Barb Jungr – before Every Grain of Sand, you are, simply put, mistaken.