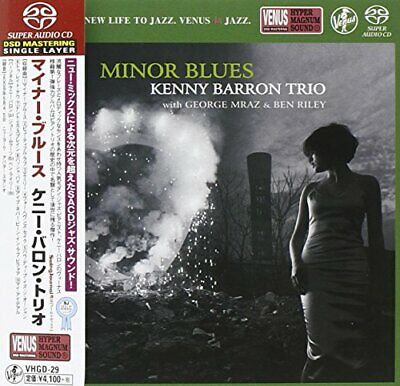 The Kenny Barron Trio – Barron, George Mraz and Ben Riley sound perfectly relaxed and inspired at the same time. One can tell from this album that they enjoyed playing together very much. This is clearly one of Kenny Barron’s best albums to date. The typically big, powerful sound of this Venus release adds to the value of this excellent album.

Venus Record’s producer Tetsuo Hara met pianist Kenny Barron for the first time in 1992, and ever since then wanted to record his trio album. He did so in 2004 by releasing the Super Standard, but Barron’s contract with another label prevented them from using his name, so they called the trio the “Super Trio”. With the expiration of that contract, Barron returned to Venus to record this superb trio album, this time properly released under his own name. Barron is a hugely talented pianist — one of the best jazz pianists alive today — and his bop-based style with flowing lyricism and unique melodic sense in in full display here. And unlike his other recent albums, this album mostly features his beautiful interpretations of standards and ballads.

Kenny Barron was honored as an NEA Jazz Master on January 12, 2010, and it was a recognition that was due. Since entering the jazz scene in the early ’60s, he has made his mark as a sideman (especially with Dizzy Gillespie and Stan Getz), solo pianist, leader, and composer. These 2009 sessions pair him with frequent collaborator Ben Riley and fellow veteran George Mraz on bass. While most of the focus is on familiar standards, the opener is Barron’s slinky “Minor Blues,” in which Barron and Mraz both shine backed by Riley’s brushwork, though the drummer switches to sticks for his breaks. The leader’s jaunty take of “Emily” and driving treatment of “How Deep Is the Ocean?” sizzle. His richly textured setting of “Too Late Now” doesn’t require its lyrics to get across the mood of the song, while his breezy Latin arrangement of Billie Holiday’s “Don’t Explain” casts this ballad in a new light. This is yet another fine example of Kenny Barron’s superb chops in a small-group setting.