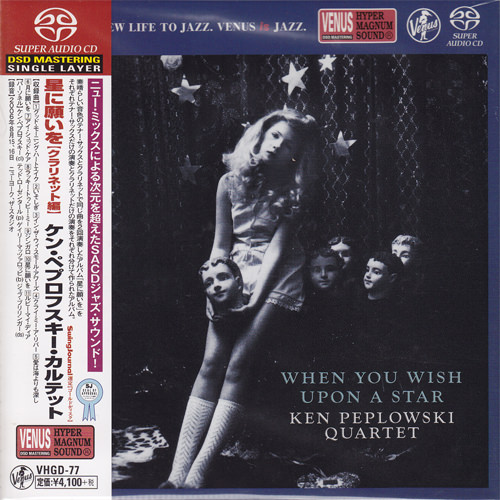 Ken Peplowski has become a household name in Japan, where Venus Records has released no less than three of his albums in recent years. On this release, the arrangements are varied, so the album doesn’t feel monotonous. There are two versions of this album. One where Ken Peplowski plays the songs on tenor saxophone and another where he plays the songs on clarinet. This is the release where he plays clarinet. Peplowski’s clarinet sounds are warm, attractive, and eloquent, while still rooted in the jazz tradition. His playing is so expressive that it’s possible to almost hear the lyrics of each song when he plays the melody.

Record dates made by American jazz musicians for the Japanese jazz market are often a bit different in their approach. These 2006 sessions, recorded by Ken Peplowski over two days with pianist Ted Rosenthal, bassist Gary Mazzaroppi, and drummer Jeff Brillinger, are unusual in that ten standards (all ballads) are featured, though with the leader playing one version on tenor sax, then immediately following it with another on clarinet. The players are capable enough in varying the approach to each tune with the different instrumentation, with Peplowski’s smoky tenor and lyrical clarinet satisfying the listener each time. But one would bet that most listeners would rather have this two-CD set programmed with one disc devoted to each instrument, rather than hearing each song twice in a row. Rosenthal, the last pianist to work with the late great baritone saxophonist Gerry Mulligan, is the consummate accompanist, while Mazzaroppi and Brillinger also prove flawless in their respective roles. The contrast is best heard in the two versions of “How Deep Is the Ocean,” where the slow, vibrato tenor take is distinctly different from the brisker, light-hearted clarinet arrangement. Many of these tracks are perfect for late-night listening, while fans of Ken Peplowski will definitely want this enjoyable, if somewhat pricey, import.

There are two versions of this album. This is the release where he plays clarinet.