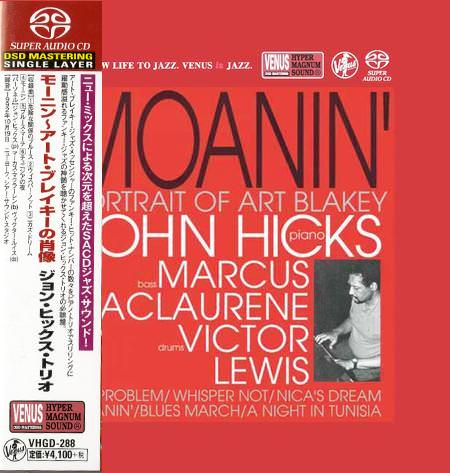 Like many other prominent jazz musicians, master pianist John Hicks started his early career with Art Blakey’s Jazz Messengers (1964-1965). This special album for Venus Records was recorded in 1992 as a tribute to his former boss who had passed away two years earlier. Aided by his well-known collaborators Marcus Maclaurene on bass and Victor Lewis on drums, Hicks here perform some of the familiar Jazz Messengers’ repertories with a lot of emotion and extra earthiness.

John Hicks was an American jazz pianist, composer, and arranger. He was leader for more than 30 recordings and played as a sideman on more than 300. After early experiences backing blues musicians, Hicks moved to New York in 1963. After periods with Kenny Dorham and Joe Henderson, Hicks joined Art Blakey’s Jazz Messengers in 1964. His recording debut was with Blakey in November that year, for the album ‘S Make It. Early in 1965, Hicks toured with Blakey to Japan, France, Switzerland, and England. Blakey encouraged his band members, including Hicks, to compose for the band, although they also played compositions by previous members of the band. He stayed with Blakey for two years, during which time his playing was compared with that of McCoy Tyner, for the level of energy displayed and for some of the intervals that they used.

Hicks’ many influences–including Bud Powell, Art Tatum, Fatz Waller, Oscar Peterson, Thelonious Monk and McCoy Tyner–shaped his modern yet earthy style. It is not easy to perform these tunes–forever etched to jazz fan’s memories with the powerful two-horn quintet sound of the Messengers–with a piano trio, but Hicks is successful here, more than making up the lack of horn players with his powerful piano playing.