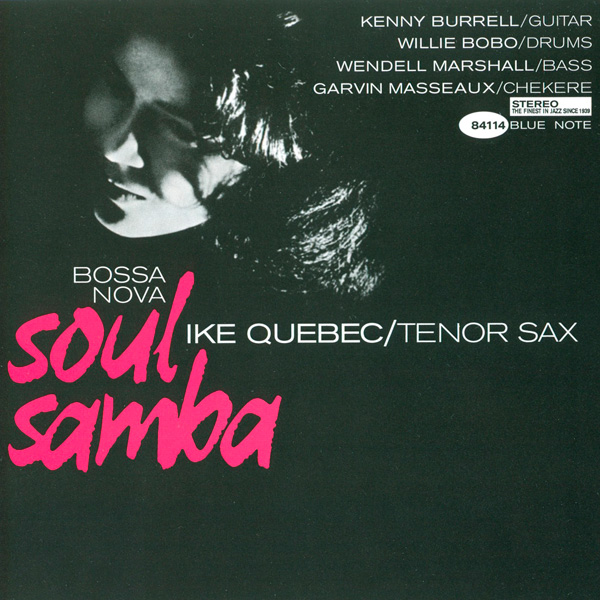 Soul Samba (aka Bossa Nova Soul Samba) is an album by American saxophonist Ike Quebec recorded in 1962 and released on the Blue Note label. It was Quebec’s final recording before his death in January 1963.

With his thick, engaging sound and elegant romanticism, it only made sense for Ike Quebec to try his hand at the bossa nova boom Stan Getz kick-started in 1962, and that’s what he did with Soul Samba. However, Quebec makes the session much more than mere bandwagon-jumping. He takes some chances with the repertoire and consciously adds a heavy blues inflection that makes Soul Samba one of the more unique interpretations of the bossa nova style. It’s also one of the more sensuous, thanks in part to the combination of Quebec’s natural tendencies and the soft, light style itself, but even more so with the extra bit of meat added via the blues. The music is warm and danceable, yet with a late-evening hush that’s more suggestive of winding down and getting cozy with someone. Quebec’s choices of material are never obvious – the Brazilian selections do not include any Jobim standards, for one thing, and both Quebec and guitarist Kenny Burrell (absolutely stellar in support) contribute original material that ranks among the album’s best performances (particularly Quebec’s “Blue Samba” and Burrell’s “Loie”). What’s more, Quebec adapts some unlikely sources – the traditional standard “Liebestraum” and the Dvorak theme “Goin’ Home” – into surprisingly effective samba pieces. The whole project is thoughtfully conceived and beautifully executed, treating bossa nova as a new means of personal expression, not just a fad to be cashed in on. Sadly, Soul Samba was Quebec’s final album, but at least his career ended on a high note.