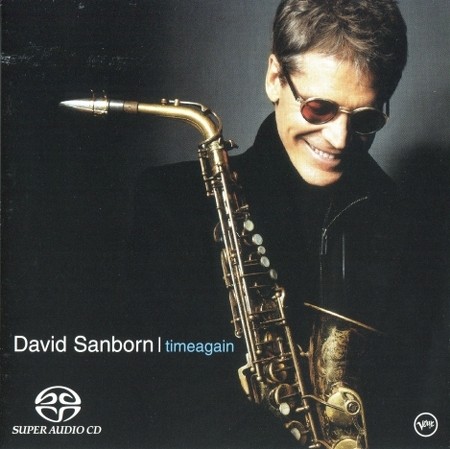 It’s not hyperbole to say that this is Sanborn’s best record since his Warner Brothers heyday of the ’80s. The same can be said of the quality of the musicians gathered for the alto saxophonist’s first album for Verve. The material may be the best he’s ever assembled, with many cover tunes that are singularly identified with other artists, yet he redefines them. None of those words are meant to disparage those Grammy-winning gold albums of yore, it just his high standards have been magnified many fold on these 10 tracks.

From the absolutely smoke-any-kind-of groove all-star band featuring a wailing Russell Malone on guitar, Christian McBride on bass, Mike Mainieri from Steps Ahead on vibes, and Sanborn’s longtime keyboard player, Ricky Peterson, to the sterling arrangements of re-imaged classics, including Stevie Wonder’s “Isn’t She Lovely” done as a ballad and the timeless “Harlem Nocturne” spiced with world music overtones, this record sparkles. “Comin’ Home Baby” and “Christo Redentor,” songs made famous in the ’60s by Herbie Mann and Donald Byrd respectively, are interpreted with such passion and fire, it’s as if the melodies have belonged to Sanborn the whole time. His exquisite alto tone shines throughout the proceedings, and Malone just shows off on “Sugar”, and one of three Sanborn originals, “Spider B”.

Master saxophonist David Sanborn makes an astounding label debut with Time Again, and once again reminds his fans that he is firmly established as one of jazz’s best alto saxophonists. Joined by an all-star ensemble of master musicians that includes Russell Malone on guitar, Steve Gadd on drums, Christian McBride on bass, Mike Mainieri on vibraphone, and Randy Brecker on trumpet and flugelhorn, among others, David Sanborn delves deep into his seemingly never-ending repertoire to bring his distinctive sound to a variety of pop and jazz standards. Opening with a super-funky rendition of “Comin’ Home,” Sanborn reveals the culmination of hard work and staying power with a powerful statement of the melody which seamlessly segues into awesome solos taken by Mainieri and McBride. They get even better on “Cristo Redentor,” offering listeners another side of this infamous gospel jazz piece made famous by Donald Byrd. With soulful, innovative lines and a nighttime groove, Sanborn plays a reflective, sincere set that is destined to revive this song to the level not heard since the ’70s, when it was the theme song for several late-night radio programs. Ditto for “Harlem Nocturne,” which has become one of the most recognized television theme songs in the past decade. Sanborn, however, lifts it to another level with his dynamic 21st century outlook and brilliant improvisations. The all-masterful Time Again has something for everyone. It’s romantic, it’s funky, it’s laid-back, and it’s definitely one that should be in your music collection. In a sense, David Sanborn has pulled off one of the best recordings of his career.