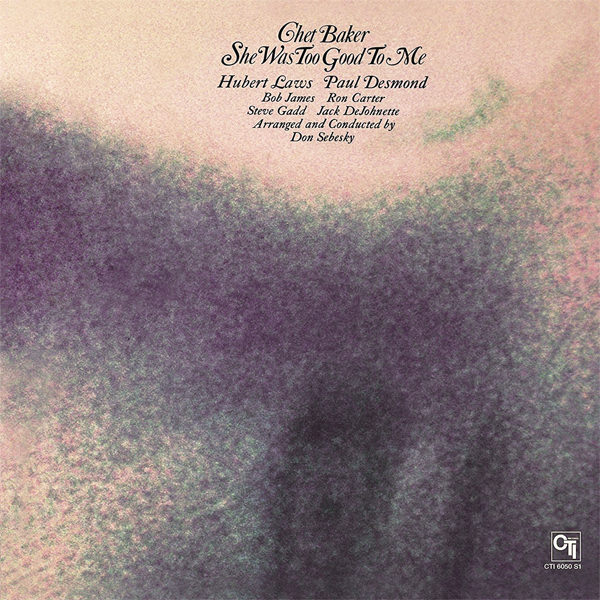 Chet Baker was one of the most important representatives of the West Coast Cool Jazz movement. His heroin addiction is well documented with his exploits and misadventures wrapped in legendary anecdotes, but thankfully his life story never managed to overshadow his unmistakable talent. Chet Baker has one of the most recognisable sounds of all the jazz musicians in the cannon; his trumpet playing is intimate, simple and delicate with a hint of melancholy that tears at the heartstrings.

She Was Too Good To Me was released in 1974 on Creed Taylor’s CTI label after a 4 year absence from the scene. And what a comeback: excellent vocal Cool Jazz tunes are interlude with instrumental goodness from the undisputed master of the trumpet.

The modern image of trumpeter/vocalist Chet Baker is a hopelessly fractious one. Baker is, at once, a brilliant musical autodidact with a superb ear while, at the same time, a musician with a nonexistent grounding in musical theory. Like cornetist Bix Beiderbecke before him, Baker taught himself, thereby forging a personal sound identifiable across the space-time continuum. He left a 40-year aural testament, recorded during the most revolutionary period in jazz, that revealed a remarkable focus unshaken by those changes.

Baker’s peccadilloes were also larger than life. Like Beiderbecke, Baker was hopelessly chemically-dependent, a life-long heroin addict whose addiction greatly contributed to his death as Beiderbecke’s alcoholism did to his. Unlike Beiderbecke, Baker recorded copiously, particularity after his “comeback” in 1974, and then primarily to fund his addiction, so copiously that at least some of his recordings had to be good, if not exceptional, conforming to the adage that, “monkey hitting keys at random on a typewriter for an infinite amount of time will almost surely type the complete works of William Shakespeare.”

Perhaps this sells Baker short; perhaps not. In the end, criticism of Baker’s work must be cast in a post-modern isolation from the man himself and his story; but even that is not fair. Baker did not produce the music he did because of the confluence of his chaotic life, he did so in spite of it. There were glimmers of unimpaired sunshine in his discography and one of these occurred at the beginning of his “comeback” 1974, when he recorded She Was Too Good To Me for Creed Taylor’s CTI Records.

Baker reached a personal nadir in 1969 when he was assaulted in San Francisco, sustaining injuries to his teeth. His oral health always dubious, Baker finally had is teeth removed and a denture placed. Normally a death knell for brass players, Baker simply re-taught himself to play trumpet as he did after losing his left incisor in the early 1950s. Between 1969 and 1974, Baker cleaned up and maintained on methadone. He enjoyed his longest period of stability and domesticity. His last recordings before his come back—Albert’s House (Bainbridge/Repertoire, 1969) and Blood, Chet and Tears (Verve, 1970)—were uniformly and appropriately panned by the music media. Baker’s four years off did him wonders as he emerged with She Was Too Good To Me, his assimilation of his experience to date, marking him a more mature and accomplished artist.

Creed Taylor Incorpoated had been in business since 1967 and had released such landmark recordings as trumpeter Freddie Hubbard’s Red Clay (1970) and Antonio Carlos Jobim’s Stone Flower (1970), as well as saxophonist Stanley Turrentine’s Sugar the same year. The label established itself as forward thinking and carefully considered. Baker presented a different, and even difficult, artist for the label to frame. Alto saxophonist Bud Shank’s admonition that Baker “had stopped developing [as an artist] when he became addicted,” loomed large. But Baker’s period of stability fully prepared his return to the studio.

She Was Too Good To Me placed Baker in the company of contemporary alto saxophonist Paul Desmond, and the up-and-coming flautist Hubert Laws and pianist Bob James (playing electric piano). CTI’s house arranger Don Sebesky provided string charts for an eclectic mix of standards, vocals and instrumentals. Taylor definitely wanted to update the sound of Baker’s surrounding, doing so thoughtfully and with great care. Bassist Ron Carter and drummers Jack DeJohnette and Steve Gadd added a seamless post-bop background for Baker, and, for that matter, Desmond, who shares great empathy with Baker’s playing.

The recorded results were superb. James’ electric piano brightens “Autumn Leaves,” preparing the way for some of Baker’s most exciting solo ideas to date. Laws spars with Baker on tenor saxophonist Hank Mobley’s bop anthem “Funk in the Deep Freeze.” The song is played with a perfect balance of the West Coast cool Baker helped forge and the warmer climes of hard bop. While Baker remains safely in this middle and lower registers, his soloing at tempo is self-assured and spot-on harmonically.

Baker’s voice, an acquired taste to be sure, is in top form. Still possessing the boyish charm of his 1950s recordings, he has not deteriorated to the wheezy croak that would be considered de rigueur listening from his “late period.” He exudes absolute sweetness on the title piece and an uncommon sunniness on “With A Song In My Heart.” Hard to take seriously for the majority of his career, Baker hit a home run, if not a grand slam with She Was Too Good To Me. It is an immediately accessible and enjoyable recording by an important and controversial figure in jazz. –C. Michael Bailey, All About Jazz