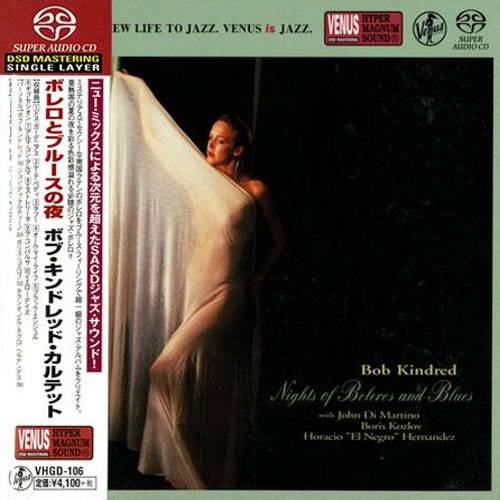 Bob Kindred is a great tenor sax player who is consistently underrated and underexposed. Aside from some albums released by the Mapleshade label, it is not easy to find his leader albums on the market. For this second release from Venus, Kindred and co. decided to do a collection of Latin music, mostly boleros. The brawny and sexy sound of Kindred’s tenor is a perfect match for the mysterious and romantic music. The music transports the listener to a steamy bar in a subtropical country in Latin America. One can almost feel the hot and humid air.

Robert Hamilton Kindred, 11 May 1940, Lansing, Michigan, USA. Raised just outside Philadelphia, Pennsylvania, Kindred began studying clarinet and later played this instrument and the alto saxophone with the Philadelphia Youth Jazz Band, under the direction of Jimmy DePriest. At 17 he was with Pennsylvania Sixpence, a small band that played swing and dixieland and which played at many east coast venues and also toured Europe and made records. After graduating from college, Kindred left music and entered the business world, becoming a corporate head-hunter and forming his own company. At the age of 30 he heard Phil Woods in concert and decided to being playing again. He studied with Woods and after two years decided to re-enter the world of music on a full-time basis. He joined the ongoing Glenn Miller Orchestra and then joined Woody Herman, appearing on 1975’s Live At Carnegie Hall. Among other artists with whom he played around this time were Charles Earland, Harry Sweets Edison, Hank Jones, Mel Lewis, Shirley Scott and Buddy Tate, and he has also played with the North Carolina Symphony Orchestra. Kindred, who would gradually become better known as a tenor saxophonist, also plays baritone saxophone and flute. His own concert performances include a tribute to Ben Webster and Johnny Hodges, To Ben And Johnny, With Love, and an annual work, Bending Towards The Light … A Jazz Nativity, of which he is co-composer with his wife, singer Anne Phillips. During the 90s, Kindred appeared at many prestigious venues both in the USA and overseas, including among the former the Topeka Jazz Festival, the Colorado Springs Jazz Party, Carnegie Hall, in a tribute to the Nicholas Brothers, and the Fairbanks Arts Festival at which he conducted clinics for jazz woodwinds and performed as soloist with the symphony orchestra. In 2001, Kindred recorded two well-received albums with Little Jimmy Scott, Over The Rainbow and But Beautiful, and in the same year a duo set with Larry Willis for Mapleshade Records. In addition to performing, Kindred is also active in jazz education as a clinician and has worked with the International Art Of Jazz, Festival Jazz and the Smithsonian Jazz Repertory Company. Although much reference has been made to other tenor saxophonists in reviews of Kindred s work, his greatest quality is that while he might evoke occasional thoughts of these other players, he is at all times his own man, original, commanding and eloquent. Like Spike Robinson, whose late flowering was a thing of beauty, in the early years of the twenty-first century Kindred was attaining that same level of creative and popular success. That this recognition should not have happened until the mature years of his career is jazz s loss but for all its tardiness, it is certainly very well deserved.