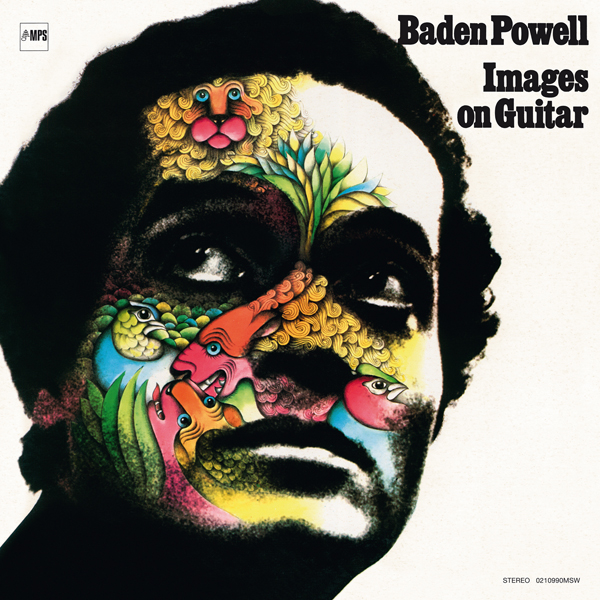 Crowned with one of the most fanciful covers in the entire MPS catalogue, this October 1971 Baden Powell recording heralded in the second trilogy of the six LPs he recorded for the label between 1966 and 1975. Fueled by his artistic partnership with writer-producer Joachim Ernst Berendt (Berendt helped further Powell’s European career by inviting him to play at the Berlin Jazz Festival in 1967), Powell was without a doubt the most inventive Brazilian guitarist of the period. On this album Powell and his new quartet sketch the sound tableaus that color the background for French singer Janine Waleyne. The singer had partnered with the likes of Stan Getz and Michel Legrand. For Powell she was an ideal counterpart to his guitar playing. The journey begins with the sedate, almost somber samba “Até-Eu”. With its wandering nocturnal melancholy “Violão Vagabundo” follows a similar musical path. There’s a funky feel to the popular hit “Blues À Volonté”. It also harbors one of the most brilliant scat choruses to be heard between Rio, Paris, and Baden-Baden. The theatrical finesse of “Images” insures that virtuoso solo interludes shine between the vocal pieces. This is where we find the LP’s other famous pieces – the classy “Petit Waltz” with its capricious, careening rhythms in the second section, and “Conversação Comigo Mesmo” (conversation with myself), a fantastic hybrid of choro and baroque with a percussive foundation. The unpretentious serenade “Sentimentos” presents Powell as a profound lyricist; and “É De Lei” is a tongue-in-cheek celebration of chromatics. With its intensive dialogue between rock-oriented improvisation and a magical sensuousness, “Canto” closes out this richly colored album.