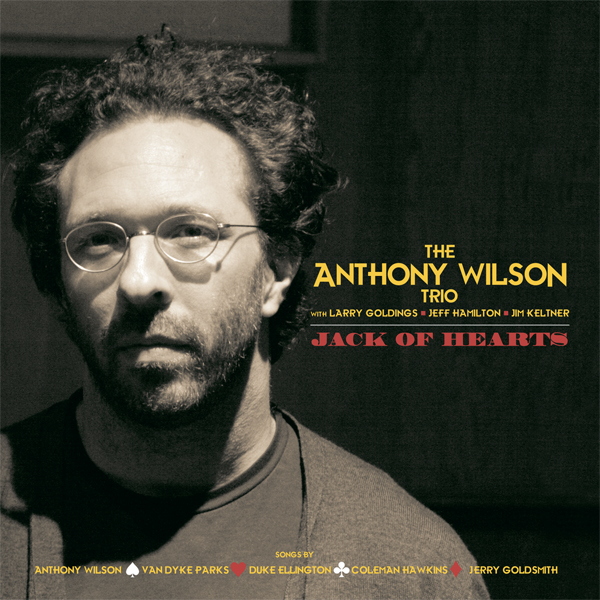 A possible breakout album for Anthony Wilson, this organ trio with the superb Larry Goldings on B3 features two of the finest drummers working today – half the tunes are with the swinging Jeff Hamilton on drums and the rest session drummer par excellence Jim Keltner who lays down some truly great percussion. Aside from Wilson’s exploration of Latin, south of the border influences, the recording features unique performances of music by Ellington, Hawkins, Jerry Goldsmith and Van Dyke Parks.

The recording took place in Oceanway Studio A on an ATR100 with a new Flux Magnetics Headstack, direct to 2-track. The company work their way through a mix of standards from Ellington and others including a superb 8-minute version of the “Love Theme” from Jerry Goldsmith’s brilliant soundtrack to the film “Chinatown” and a handful of original tunes.

Jack of Hearts isn’t the first Anthony Wilson album to feature an organist extensively; for example, he worked with the Los Angeles-based organist Joe Bagg on his 2005 release Savivity. But the guitarist has worked with acoustic pianists more often than organists (at least as of 2009), and Jack of Hearts is unusual in that it finds Wilson not using a pianist at all. On this early 2009 session, Wilson forms an intimate trio with Larry Goldings on organ and Jeff Hamilton or Jim Keltner on drums. In the ’90s and 2000s, Goldings was one of the leading proponents of a post-Jimmy Smith aesthetic on the Hammond B-3. Goldings has been greatly influenced by the late Larry Young, who started out as a Smith disciple but evolved into an innovative, distinctive post-bop/modal player and went down in history as “The John Coltrane of the Organ.” Of course, Goldings is not a clone of Young; he is most certainly his own person, but he shares Young’s love of post-bop. So it isn’t surprising that Goldings does a lot to shape the post-bop perspective that dominates Jack of Hearts. His presence is a major plus on material that was composed by Goldings and/or Wilson, and it is a major plus on memorable arrangements of Coleman Hawkins’ “Hawkeyes” and two of Duke Ellington’s lesser-known pieces (“Zweet Zursday” and “Carnegie Blues”). The fact that neither of those Ellington tunes is a standard speaks well of Wilson, who is smart enough to realize that one of the joys of the vast Ellington songbook is hearing all of the worthwhile Ellington compositions that didn’t become standards. Jack of Hearts is a consistently engaging addition to Wilson’s catalog. —AllMusic Review by Alex Henderson