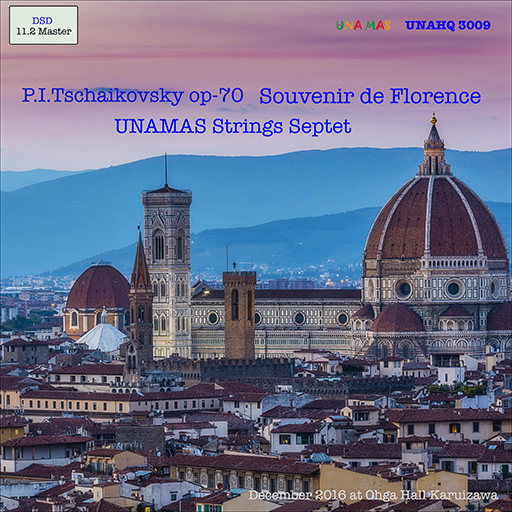 From the award-winning UNAMAS label, Tchaikovsky’s last masterpiece, String Sextet “Memories of Florence”, was distributed in high-resolution as the fourth in the classic series at Karuizawa Oga Hall.

“P. I Tchaikovsky op-70 Souvenir de Florence”, an album by renowned engineer Mick Sawaguchi, who aims for orchestral sound with a quintet arrangement with contrabass to Tchaikovsky’s original sextet Enjoy.

Because of the strong creative power of his later years, he was particular about his extensive brushstrokes, and a careful and old-minded opposition method, which is rare in Tchaikovsky’s chamber music, was developed, and consists of four traditional movements as follows.

In addition to the original organization by violin, viola, and cello 2, UNAMS In order to reinforce the low frequencies that characterize Sound, an ensemble by a special project is constructed in order to express the characteristics of surround even in clearly expressing the opposite method intended by the production Chaikossky with a newly added Cb.

The recording was held from 2016-12-13 to 14 at Karuizawa Oga Hall, which became a fixed point in the UNAMAS Classic Series. This time, in order to make the most of the beautiful sound of Oga Hall, it is produced with 9CH surround incorporating height surround. We have conducted various height CH makings at Oga Hall every time, but this time, for the first time, a height microphone is installed in the 2nd floor seat to create a rich space.