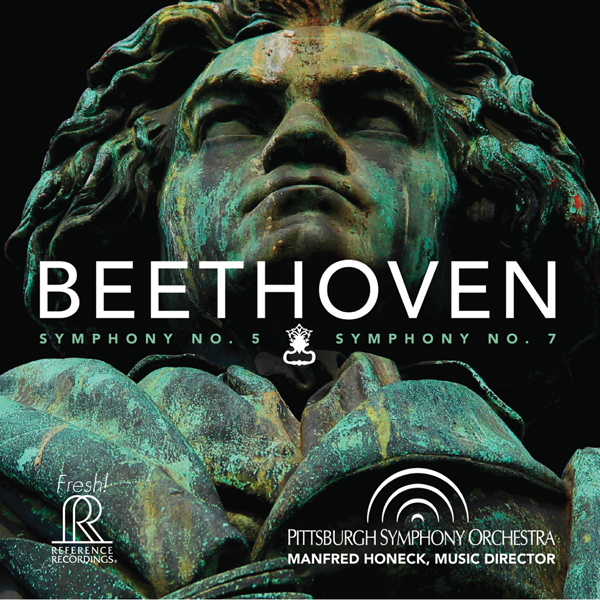 SAN FRANCISCO: Conductor Manfred Honeck writes in his fascinating and thorough music notes: “A recording of Beethoven is always a great occasion and event. The marrying of the music’s historic interpretation with the brilliance of the Pittsburgh Symphony Orchestra’s playing and the fantastic technique of Soundmirror have made this recording,

comprised of three live concerts from December 2014, possible. It has been a joy to look deeply into that which Beethoven has composed, while also discovering the sense and content of the music and thus the reason why it has been written. For me, this is always the most beautiful part of the creative process.”

This release is the fourth in the highly acclaimed Pittsburgh Live! series of multi-channel hybrid SACD releases on the FRESH! series from Reference Recordings. Each, including the newest Bruckner 4 (FR713SACD) has received dozens of critical accolades. Dvořák/Janáček (FR710SACD), garnered a GRAMMY® nomination for Best Orchestral Performance. Since 1896, the Pittsburgh Symphony Orchestra has been known for its artistic excellence, a rich history of the world’s finest conductors and musicians, and a strong commitment to the Pittsburgh region and its citizens. Past music directors have included many of the greats, including Fritz Reiner (1938-1948), William Steinberg (1952-1976), Andre Previn (1976-1984), Lorin Maazel (1984-1996) and Mariss Jansons (1995-2004). This tradition of outstanding international music directors was furthered in fall 2008, when Austrian conductor Manfred Honeck became music director of the Pittsburgh Symphony.

The orchestra has been at the forefront of championing new American works, and gave the first performance of Leonard Bernstein’s Symphony No. 1 “Jeremiah” in 1944, and John Adams’ “Short Ride in a Fast Machine” in 1986. The Pittsburgh Symphony has a long and illustrious history in the areas of recordings and radio concerts. As early as 1936, the Pittsburgh Symphony broadcast on the airwaves coast-to-coast and in the late 1970s it made the groundbreaking PBS series “Previn and the Pittsburgh.” The orchestra has received increased national attention since 1982 through network radio broadcasts on Public Radio International, produced by Classical WQED-FM 89.3, which are made possible by the musicians of the Pittsburgh Symphony Orchestra.
This release and the entire Pittsburgh Live! series are recorded and mastered by the team at Soundmirror, whose outstanding orchestral, solo, opera and chamber recordings have received more than 70 Grammy nominations and awards. Soundmirror has recorded for every major classical record label, now including Reference Recordings.

FRESH! is part of Reference Recordings’ mission to encourage unique and fine artists, and give them a strong platform for promotion and sales nationally and internationally.

Even though the program is a standard pairing of famous symphonies by Ludwig van Beethoven, and the live performances are by a modern orchestra, this intriguing hybrid SACD from Reference Recordings is a real adventure. The excitement lies in Manfred Honeck’s clear-headed and musically sound interpretations and the astonishing performances by the Pittsburgh Symphony Orchestra, which are not based on conventional practices but on careful study of the scores and original sketches, documentation from Beethoven’s time, and what has been concealed under layers of later traditions that were never intended. Honeck takes into account the various schools of thought that have given us a romanticized Beethoven, an objective Beethoven, and a historically informed Beethoven. But by regarding these conventions as secondary to the internal evidence of the Symphony No. 5 in C minor and the Symphony No. 7 in A major, and by adapting his orchestra to the norms of the early 19th century, Honeck exposes many exciting details that are often lost through overly homogenized orchestral blending, unimaginative use of dynamics, and excessively slow, reverent tempos. As a result, these performances are utterly transparent, the pacing is extremely brisk and lively, and the interpretations are as fresh as advertised on the cover. The brilliant reproduction is also a major contribution to this album’s success, and it brings great clarity to these startling and revelatory recordings. ~~AllMusic Review by Blair Sanderson