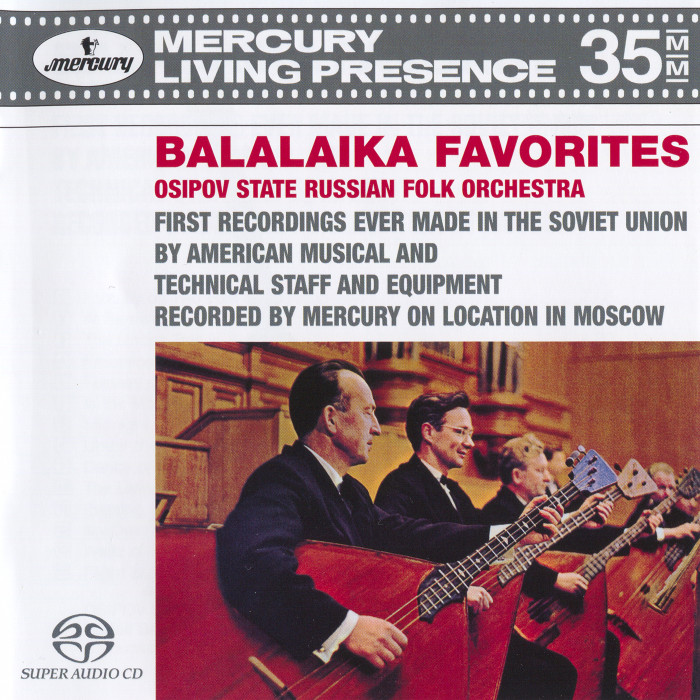 This is the first recordings ever made in the Soviet Union by american musical and technical stuff and equipment, recorded on lovation in Moscow. This SACD presents, for the first time, the Osipov State Russian Folk Orchestra’s legendary recordings in their original 3-channel (left, right & centre) versions. Using the original 35mm film masters, the disc features a DSD 3-channel stereo and a new DSD stereo transfer.

For what it is, it doesn’t get any better than this. What it is, of course, is a collection of Russian folk music played with astonishing artistry by the Ossipov State Russian Folk Orchestra, an ensemble made up of dormas, gooslis, Vladimir Shepherd’s Horns, and, naturally, balalaikas, balalaikas, balalaikas. The sound of such an orchestra is far different from any other Western ensemble — imagine an orchestra of guitars, mandolins, pan pipes, and harps — but still deep, colorful, and subtle. The sound of the music is likewise far different from any other Western music — imagine folks songs long on melody and rhythm and short on harmony and form — but still charming, delightful, and, in its own way, unutterably appealing. Certainly, this disc charmed audiences when it was first released in the early ’60s on Mercury Living Presence: the LP was a classical best seller. Part of the appeal might have been its incredibly realistic sound: recorded on 35 mm film on three channels, the LP quickly became a favorite of stereophiles everywhere. Restored in super-audio, three-channel digital, the disc sounds more realistic than ever, with the lead balalaika sitting in a chair to the listener’s right and the lead goosli sitting in a chair on his/her left. While not for everyone, anyone who loves the exotic, the unusual, and the extraordinarily well-recorded will appreciate this disc.