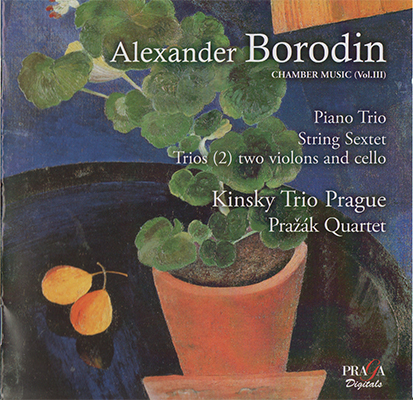 This release is the third and presumably final installment in Praga’s survey of Borodin’s chamber music. I gave a warm welcome to Volume 2 of the series in Fanfare 35:3. That earlier release included a work from the composer’s maturity, the Read more Serenata , dating from 1886, the present disc is devoted exclusively to early works, from the period 1850–62, which are very short, unfinished, or both. I hear little in them that is specifically Russian in character or suggestive of the mature Borodin’s distinctive voice. They are instead written in a more international idiom, which is not unexpected, given that they were produced prior to Borodin’s association with the Mighty Handful and at a time when he was experiencing most of all the influence of such composers as Mendelssohn and Schumann. The fragmentary nature of these pieces is explained by the fact that they were written for private performance rather than public dissemination and were not published until long after the composer’s death. Nonetheless, these early pieces are surprisingly accomplished and enjoyable, if lacking the melodic inspiration we would expect from the composer of Prince Igor , the symphonies, and the Second String Quartet.

The most substantial work in terms of length is the three-movement Piano Trio, dating from 1862. About 22 minutes in duration, it appears to be unfinished, lacking a finale, although it is not certain that the composer didn’t consider it complete as written. In any case, he never submitted it for publication, and it appeared in print only in 1950. Suggestions of Schumann and Mendelssohn are evident in the boisterous first movement and the ensuing Romanze, but in the mazurka-like Intermezzo the stylistic influences move farther east. The ending of that movement does sound like something else was meant to follow. The Sextet, written in Heidelberg in 1860, consists of two movements lasting a little over eight minutes in all. Reminiscences of Mendelssohn are again audible in the first movement, the longer of the two, which at one point almost quotes a phrase from a Mendelssohn quartet. Borodin here makes good use of the rich texture this combination of instruments allows. The second movement is a brief set of variations on a songlike melody.

The two string trios, both for the unusual combination of two violins and a cello, are the earliest works on the disc, believed to date from 1850, when the composer was still a teenager. The G-Minor work, consisting of a six-minute Andantino, is a set of variations on a beautiful, plaintive melody from a well-known Russian folk song, the only evidence of such ethnicity that I find in these works. The G-Major trio consists of Allegro and Andante movements lasting a total of 16 minutes. Once again it appears that a finale is missing, either lost or never written. The confident, assertive, involved writing in the Mendelssohnian first movement seems quite precocious, if it is in fact the product of a 16-year-old with only rudimentary musical training. Borodin wrote the Serenata alla spagnola as part of a joint project with Rimsky-Korsakov, Glazunov, and Liadov to compose a quartet in honor of their patron and publisher, Mitrofan Beliaev. All movements in this composition make use of a three-note motif (B?-A-F) derived from the dedicatee’s name. Borodin’s contribution is a strange and intriguing little piece, sounding like an updated fragment from Boccherini’s Musica notturna delle strade di Madrid.

These performances represent a collaboration between two ensembles. The Piano Trio and the Serenata are of course performed by the Kinsky Trio and the Pražák Quartet respectively, without assistance. The string trios are performed by the violinist and cellist of the trio and the first violinist of the quartet. The Sextet is played by the quartet, plus the cellist of the trio and a second violist who belongs to neither ensemble. Notwithstanding these changing configurations, the performances seem uniformly excellent, although the only alternative I have available for comparison is a 1952 recording of the Sextet by the Bolshoi Theatre Quartet with Rudolf Barshai and Sviatoslav Knushevitsky as the second violist and cellist, on a Melodiya LP. That performance impresses me as a bit more fluent and spontaneous but does not clearly surpass the Czech musicians’ effort. I haven’t heard the three-disc Brilliant Classics set of Borodin chamber works that was given a mixed review by Barry Brenesal in Fanfare 34:1. Neither that set nor the three individual Praga discs include the original string-quartet version of the Russian Scherzo , which later became the second movement of the composer’s unfinished Third Symphony.

The SACD stereo sound on this release is vivid, spacious, and lifelike. The CD layer, good enough on its own, is by comparison a bit pale, with less spaciousness, immediacy, and color. I do not have the equipment to evaluate multichannel sound. Proofreading of the accompanying written material leaves something to be desired. It assigns the string trios to 1855 on page 2 of the booklet but to 1850 on page 4 and in two other locations. “Pražák” is spelled correctly in some places but misspelled “Prážak” in others.

This disc offers music that is appealing if not top-drawer, and I recommend it, especially to those wishing to complete their collection of Borodin’s chamber music or explore his early efforts as a composer.

Note:
The young Kinsky Trio continues the tradition of the Czech chamber music school: that of the Suk and Guarneri Trios as much as that of the famous quartets: the Vlach and Smetana yesterday, today the Zemlinsky… and Pražák. Under the leadership of Pavel Hůla, primarius of the latter, these ‘sins of youth’ again reveal their spontaneity and native Russian lyricism, souvenirs of afternoons of chamber music in which Borodin, an amateur cellist, participated in Saint Petersburg and Europe.