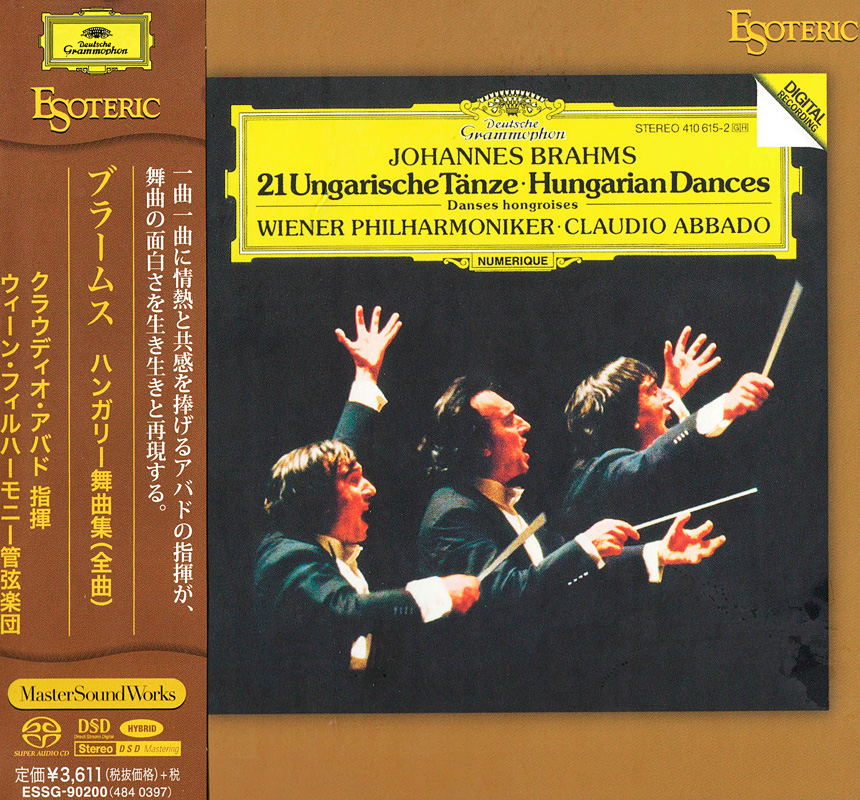 At their best, and especially on home ground in central European repertory, Abbado and the Vienna Philharmonic could produce electrifying music-making, as on the present recording of Brahms’s Hungarian Dances made in Vienna’s Sofiensaal in 1982. The recording was commissioned as part of Deutsche Grammophon’s superb 8-volume, 62-LP “Brahms Edition”, a survey of the composer’s complete musical output which was released in 1983 to mark the 150th anniversary of Brahms’s birth. Gramophone magazine’s Robert Layton commended the warmth, eloquence and virtuosity of the Vienna Philharmonic’s playing, adding that, though Abbado was scrupulous in his observation of the letter of the score, “the spirit of what Brahms liked to refer to as his ‘genuine gypsy children’ is always in evidence”.

Johannes Brahms was 17 when he encountered the brilliant young Hungarian violinist Ede Reményi in Hamburg in 1850. Reményi was passing through the city to the United States after being deported from Hungary for his involvement in the 1848 uprising against the Austrians. Brahms was intoxicated by Reményi’s transcriptions of gypsy and Magyar folk songs and dan¬ces, a fascination that deepened in 1852 when the two men toured together. The two sets of Hungarian Dances which Brahms later published were not the only fruits of the experience. Throughout a composing career that spanned more then 40 years, Hungarian influences were never far from his music. Brahms wrote his Hungarian Dances for piano duet. Books 1 and 2 (nos. 1-10) were pub-lished in 1869, Books 3 and 4 in 1880. The 1880 set offers what might best be called original compositions in the Hungarian style rather than free arrangements of the kind of Reményi-derived material which Brahms had once taken to be authentic. The 1880 set was never quite as popular as the 1869, perhaps because Brahms was no longer interested in the previously all-pervasive csárdás. Yet such is the craftsmanship of the later dances, it is they, paradoxically, which have the stronger “gypsy” feel. The later set did have one admirer: Antonín Dvořák, who provided orchestrations of the last four dances, nos. 17-21.

Technical note:
The criterion of re-mastering is to faithfully capture the quality of the original master. ESOTERIC’s flag ship D/A converters, model D-01VU, Rubidium master clock generator model Grandioso G1 and ESOTERIC MEXCEL interconnect cables and power cords, were all used for this re-mastering session. This combination of highly advanced technology greatly contributed to capturing the high quality sound of the original master.