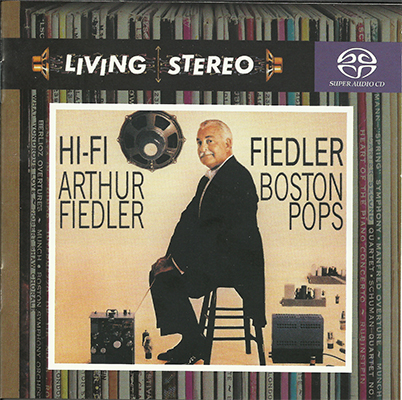 RCA Victor began recording in multichannel five years before the introduction of the first single-groove stereo LPs in 1958. They began using two-channel 1/4-inch Ampex decks but soon moved up to three-channel 1/2-inch models as the Mercury Living Presence label had been doing from the start. The idea was to provide the mixing engineers with more flexibility in preparing the final master for production. The center channel signal could be raised slightly in level to bring a solo violin or piano more forward, and/or its signal could be mixed in varying amounts into the left and right channels to achieve a more uniform and balanced stereo soundstage. But also at this time things weren’t completely jelled as to stereo being limited to only two channels. Alan Blumlein had never stated in his original patent that only two channels were required. It was just as easy to make tape heads with three channels as two. But the single-groove stereodisc locked the format into two channels – it was quite impossible to get three channels with the 45/45 system of cutting and playback.

R. D. Darrell’s notes for the 1958 stereo LP release state that the three selections (the SACd has room for six) were specifically designed for demonstrate the newest heights yet attainable in the never-ending but ever-closer approach to perfect sonic replicas of the original “live” symphonic performances. The first is the nearly half-hour suite from Rimsky-Korsakov’s opera Le Coq d’or. This composer would easily be the hi-fi choice among 19th-century composers for his kaleidoscopic orchestral colors and drama – a perfect choice for the album. The other two selections of the original LP are the pair of chestnuts Rossini’s William Tell Overture and Tchaikovsky’s Marche slave. They are also both full of coloristic elements that make the fullest use of the modern symphony orchestra. Similar material recorded for a second LP later fills out the SACD. (The actual dates for this collection were 1956, 1958 and 1960.) Chabrier’s sparkling España is another natural for hi-fi demo purposes, with its brilliant dance impressions and striking of tambourine. The disc closes out with two very familiar Liszt selections: the Hungarian Rhapsody No. 2 and the Rakoczy March.

Fiedler conducted the Boston Pops for 50 years and became the best-selling conductor in history. His 78rpm disc of the tango Jalousie had been one of the top-selling classical records in history – one million copies. He had a lifelong goal of bringing light classical music to the millions. Perhaps he was celebrated more than was his due, but Fiedler did have a way to bringing life and excitement to just about everything he chose to conduct – and he had a catholic and voracious taste for new works. Never before has the general public had the opportunity to hear these examples of his work as the RCA engineers heard them in the control room – from the original three channel tape playback. The soundstage is deepened and widened. Even a mint vinyl copy of the original pressing on a quality turntable doesn’t equal the impact of this three-channel hi-res digital disc, and it’s only around $10.