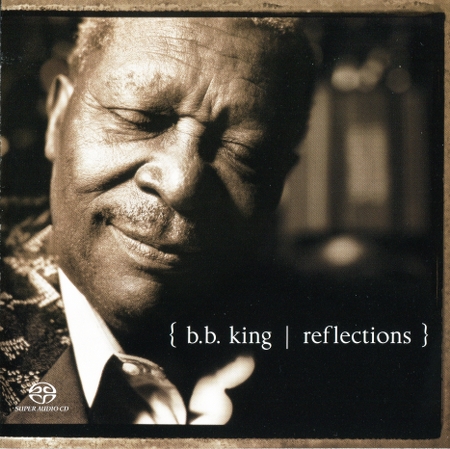 B.B. King was 77 years old when Reflections was released, which perhaps entitled him to reflect back on the song standards the album contained. Despite advancing age, King had already been unusually busy on the recording front for a septuagenarian, turning out the gold-selling duets album Deuces Wild in 1997, Blues on the Bayou in 1998, Let the Good Times Roll: The Music of Louis Jordan in 1999, the double-platinum Riding With the King with Eric Clapton and Makin’ Love Is Good for You in 2000, and the seasonal recording A Christmas Celebration of Hope in 2002. For Reflections, he again worked with Simon Climie, who produced Riding With the King, and collaborated with a session band including such notables as Joe Sample, Nathan East, and Doyle Bramhall II. The songs ranged from pop evergreens like “I’ll String Along With You” and “For Sentimental Reasons” to blues favorites such as Lonnie Johnson’s “Tomorrow Night,” with oddities like “Always on My Mind” thrown in and even a couple of remakes of the earlier King songs “Word of Honor” and “Neighborhood Affair.” The arrangements, which included horn and string parts, left room for King’s distinctive blues guitar work, but really supported his always expressive voice. The result was a confident, easygoing album that stylistically could have been made in 1953 as easily as 2003. Blues purists and aficionados of blues guitar would find it only partially satisfying, but it reflected the breadth of musical taste of an artist who always played the blues but never restricted himself only to blues music or blues fans.

Recorded by Don Murray at Record One, Sherman Oaks, CA.
Mastered by Bob Ludwig at Gateway Mastering, Portlang, ME.