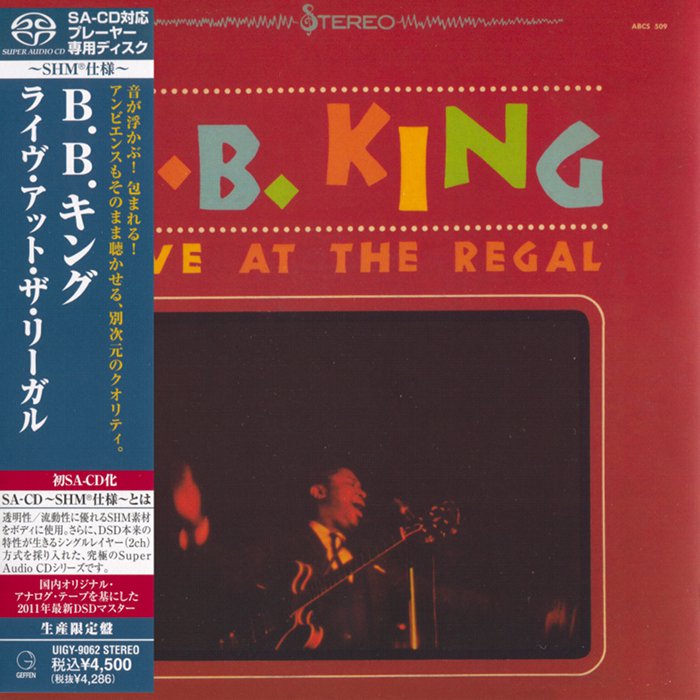 Features the 2011 DSD mastering based on the Japanese master. Reissue features the high-fidelity SHM-SACD format (fully compatible with standard SACD player, but it does not play on standard CD players). DSD Transferred by Manabu Matsumura.

B.B. King is not only a timeless singer and guitarist, he’s also a natural-born entertainer, and on Live at the Regal the listener is treated to an exhibition of all three of his talents. Over percolating horn hits and rolling shuffles, King treats an enthusiastic audience (at some points, they shriek after he delivers each line) to a collection of some of his greatest hits. The backing band is razor-sharp, picking up the leader’s cues with almost telepathic accuracy. King’s voice is rarely in this fine of form, shifting effortlessly between his falsetto and his regular range, hitting the microphone hard for gritty emphasis and backing off in moments of almost intimate tenderness. Nowhere is this more evident than at the climax of “How Blue Can You Get,” where the Chicago venue threatens to explode at King’s prompting. Of course, the master’s guitar is all over this record, and his playing here is among the best in his long career. Displaying a jazz sensibility, King’s lines are sophisticated without losing their grit. More than anything else, Live at the Regal is a textbook example of how to set up a live performance. Talking to the crowd, setting up the tunes with a vignette, King is the consummate entertainer. Live at the Regal is an absolutely necessary acquisition for fans of B.B. King or blues music in general. A high point, perhaps even the high point, for uptown blues.