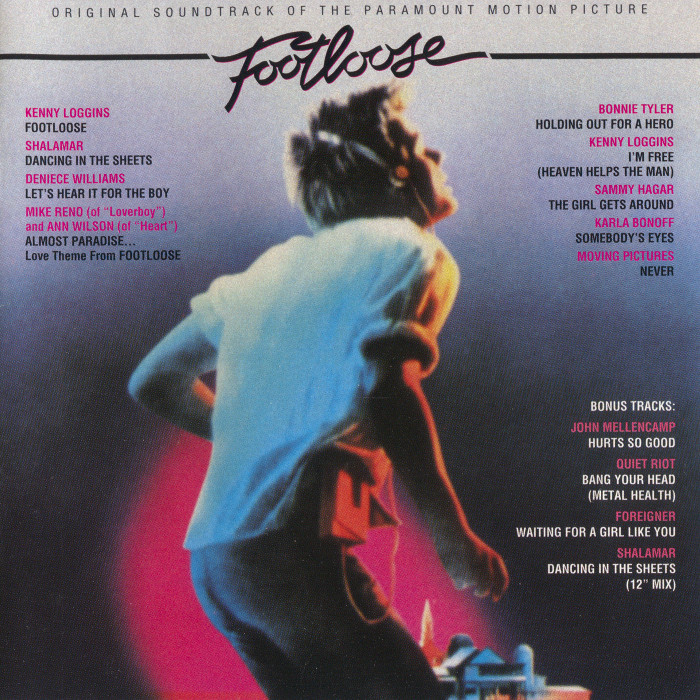 Footloose is a story of triumph and celebration, with music giving voice to youth’s desire for freedom of expression, and revitalizing the spirit of a community. The soundtrack, described as the pop soundtrack of the ’80s, has become a phenomenon. Now, in celebration of its 15th Anniversary, Footloose has been remastered from the original sources to sound better then ever, and features 4 bonus tracks.

Footloose was a throwback to ’50s rock & roll movies, with a silly plot about a town where it was illegal to dance. It was a major hit, as was its soundtrack, which spent a grand total of ten weeks at number one and sold over seven million copies. It’s easy to see why — the album delivers its mainstream pop, anthemic rock, and light dance-pop with style and an abundance of hooks. Six of the nine tracks became Top 40 hits, and three — Kenny Loggins’ bouncy title song, the excellent power ballad “Almost Paradise” (a duet between Loverboy’s Mike Reno and Heart’s Ann Wilson), and Deniece Williams’ frothy, charming “Let’s Hear It for the Boy” — shot into the Top Ten. The sound and production of Footloose has dated badly — there is a reliance on synthesizers and drum machines that instantly announces that the record was made in 1984 — but that isn’t necessarily a weakness. Not only does it function as a time capsule of a certain moment in pop music history, but many of the songs are catchy enough to transcend their production. There’s nothing of substance on the Footloose soundtrack, but it’s a light, entertaining listen. Sometimes, that can be better than something substantial.