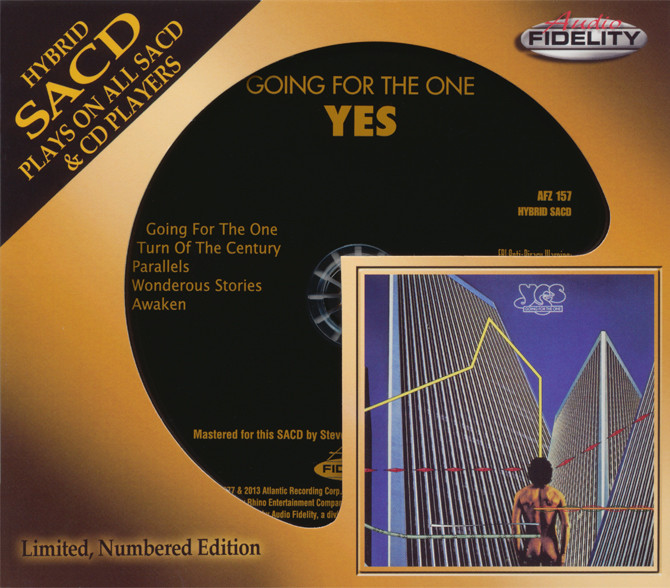 Going for the One is perhaps the most overlooked item in the Yes catalog. It marked Rick Wakeman’s return to the band after a three-year absence, and also a return to shorter song forms after the experimentalism of Close to the Edge, Tales from Topographic Oceans, and Relayer. In many ways, this disc could be seen as the follow-up to Fragile. Its five tracks still retain mystical, abstract lyrical images, and the music is grand and melodic, the vocal harmonies perfectly balanced by the stinging guitar work of Steve Howe, Wakeman’s keyboards, and the solid rhythms of Alan White and Chris Squire. The title track features Howe on steel guitar (he’s the only prog rocker who bothers with the instrument). “Turn of the Century” and the album’s single, “Wonderous Stories,” are lovely ballads the way only Yes can do them. “Parallels” is the album’s big, pompous song, so well done that in later years the band opened concerts with it. Wakeman’s stately church organ, recorded at St. Martin’s Church, Vevey, Switzerland, sets the tone for this “Roundabout”-ish track. The concluding “Awaken” is the album’s nod to the extended suite. Again, the lyrics are spacy in the extreme, but Jon Anderson and Squire are dead-on vocally, and the addition of Anderson’s harp and White’s tuned percussion round out this evocative track.

Note:
Mastered for this SACD by Steve Hoffman at Stephen March Mastering.