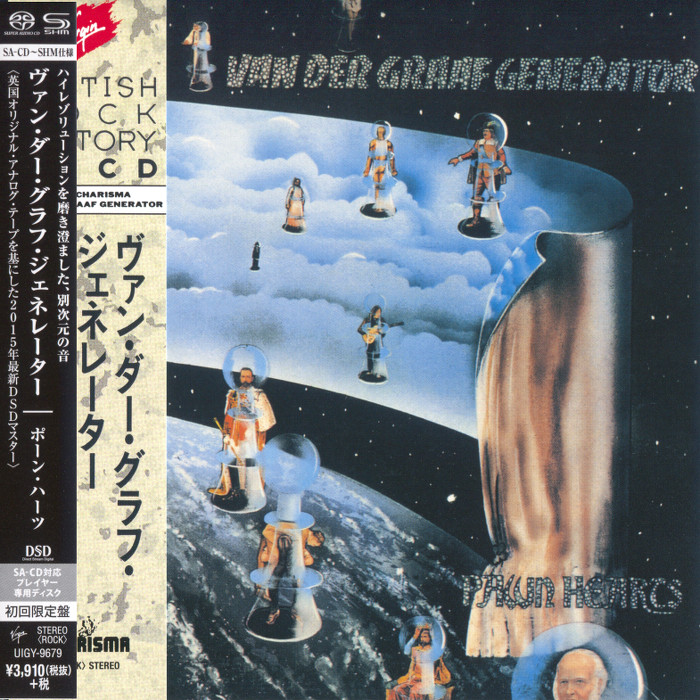 Van Der Graaf Generator’s third album, Pawn Hearts was also its second most popular; at one time this record was a major King Crimson cult item due to the presence of Robert Fripp on guitar, but Pawn Hearts has more to offer than that. The opening track, “Lemmings,” calls to mind early Gentle Giant, with its eerie vocal passages (including harmonies) set up against extended sax, keyboard, and guitar-driven instrumental passages, and also with its weird keyboard and percussion interlude, though this band is also much more contemporary in its focus than Gentle Giant. Peter Hammill vocalizes in a more traditional way on “Man-Erg,” against shimmering organ swells and Guy Evans’ very expressive drumming, before the song goes off on a tangent by way of David Jackson’s saxes and some really weird time signatures — plus some very pretty acoustic and electric guitar work by Hammill himself and Fripp. The monumental “Plague of Lighthouse Keepers,” taking up an entire side of the LP, shows the same kind of innovation that characterized Crimson’s first two albums, but without the discipline and restraint needed to make the music manageable. The punning titles of the individual sections of this piece (which may have been done for the same reason that Crimson gave those little subtitles to its early extended tracks, to protect the full royalties for the composer) only add to the confusion. As for the piece itself, it features enough virtuoso posturing by everyone (especially drummer Guy Evans) to fill an Emerson, Lake & Palmer album of the same era, with a little more subtlety and some time wasted between the interludes. The 23-minute conceptual work could easily have been trimmed to, say, 18 or 19 minutes without any major sacrifices, which doesn’t mean that what’s here is bad, just not as concise as it might’ve been. But the almost operatic intensity of the singing and the overall performance also carries you past the stretches that don’t absolutely need to be here. The band was trying for something midway between King Crimson and Genesis, and came out closer to the former, at least instrumentally. Hammill’s vocals are impassioned and involving, almost like an acting performance, similar to Peter Gabriel’s singing with Genesis, but the lack of any obviously cohesive ideas in the lyrics makes this more obscure and obtuse than any Genesis release.