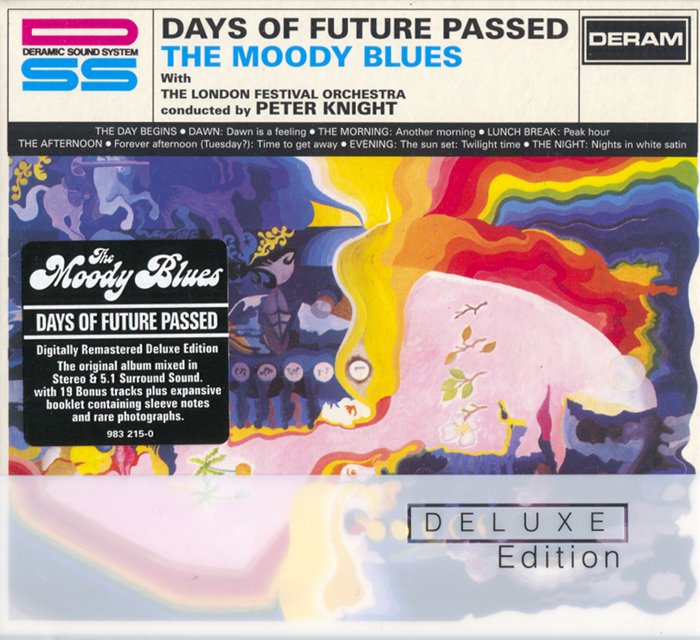 This album marked the formal debut of the psychedelic-era Moody Blues; though they’d made a pair of singles featuring new (as of 1966) members Justin Hayward and John Lodge, Days of Future Passed was a lot bolder and more ambitious. What surprises first-time listeners – and delighted them at the time – is the degree to which the group shares the spotlight with the London Festival Orchestra without compromising their sound or getting lost in the lush mix of sounds. That’s mostly because they came to this album with the strongest, most cohesive body of songs in their history, having spent the previous year working up a new stage act and a new body of material (and working the bugs out of it on-stage), the best of which ended up here. Decca Records had wanted a rock version of Dvorak’s “New World Symphony” to showcase its enhanced stereo-sound technology, but at the behest of the band, producer Tony Clarke (with engineer Derek Varnals aiding and abetting) hijacked the project and instead cut the group’s new repertory, with conductor/arranger Peter Knight adding the orchestral accompaniment and devising the bridge sections between the songs and the album’s grandiose opening and closing sections. The record company didn’t know what to do with the resulting album, which was neither classical nor pop, but following its release in December of 1967, audiences found their way to it as one of the first pieces of heavily orchestrated, album-length psychedelic rock to come out of England in the wake of the Beatles’ Sgt. Pepper’s and Magical Mystery Tour albums. What’s more, it was refreshingly original, rather than an attempt to mimic the Beatles; sandwiched among the playful lyricism of “Another Morning” and the mysticism of “The Sunset,” songs like “Tuesday Afternoon” and “Twilight Time” (which remained in their concert repertory for three years) were pounding rockers within the British psychedelic milieu, and the harmony singing (another new attribute for the group) made the band’s sound unique. With “Tuesday Afternoon” and “Nights In White Satin” to drive sales, Days of Future Passed became one of the defining documents of the blossoming psychedelic era, and one of the most enduringly popular albums of its era.