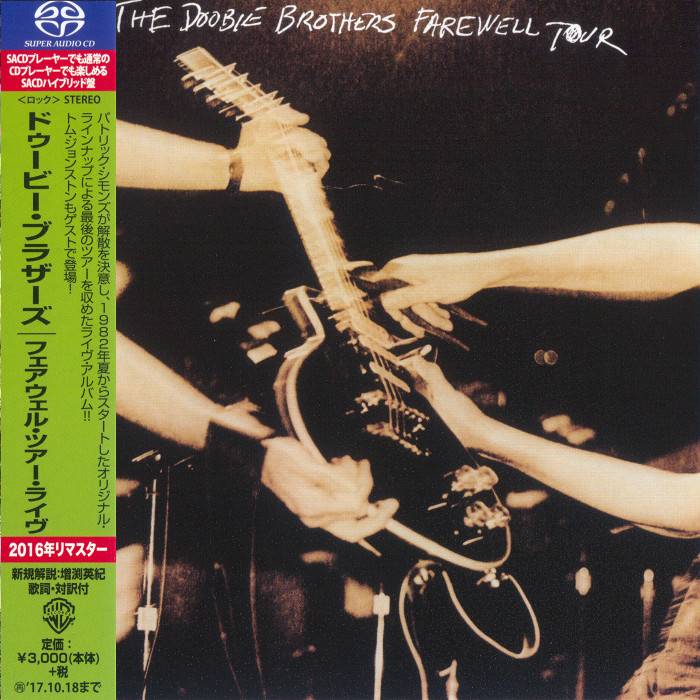 Farewell Tour is the first live album by American rock band The Doobie Brothers. It documents the group’s 1982 Farewell Tour and is a double LP set. By the early 1980s, the Doobie Brothers had evolved from the guitar-boogie sound under original band frontman Tom Johnston to a soulful keyboard-driven AOR sound under Michael McDonald. Despite the many personnel changes in the group, Patrick Simmons remained from the original incarnation of the group. The front cover shows Keith Knudsen cutting the strings on John McFee’s guitar as a symbolic gesture. The last two songs on the album were recorded at the final concert of the tour in Berkeley, California, on September 11, 1982 with vocals by original lead vocalist and guitarist Tom Johnston. For a long time the album was available on CD only in Japan.

With the benefit of hindsight, the name of this album should more accurately be “Farewell Tour: The Michael McDonald/Warner Brothers Years.” That’s because the Doobie Brothers made a relatively successful comeback in 1989 (without McDonald) on a different label and have continued to tour sporadically through the 90s and ’00s. Oddly, there are no songs from the outfit’s final Warner studio album, One Step Closer, included here. As a live rendition of greatest hits, this doesn’t measure up since so many classics, such as “It Keeps You Runnin’,” “Another Park,” “Another Sunday,” and “Rockin’ Down the Highway” are M.I.A. Only co-founder Patrick Simmons remains from the original lineup, although Tom Johnston, who wasn’t touring with the act at the time, makes a guest appearance for the final two tracks, “China Grove” and “Long Train Runnin’.” Why he doesn’t contribute vocals to “Listen to the Music,” a tune tied to his distinctive tenor, is unclear, but McDonald’s husky voice doesn’t do the peppy tune justice. The rest is a professional, unmemorable, trawl through the McDonald blue-eyed soul hits, most of them nearly indistinguishable from the studio versions. Simmons brings some much needed rootsy folk-blues to the mix with spirited if somewhat rote rendition of “Black Water,” and a nod to the band’s bluesy past with an Allman Brothers-styled take on Sonny Boy Williamson’s “Don’t Start Me Talkin’.” It seems that McDonald leaves the stage for these performances, since his contributions are inaudible. One new track is included in the form of McDonald’s forgettable “Olana,” a studio version of which ultimately showed up on the Doobie Brothers’ four-disc box. The only energy or spontaneity exhibited here is on the jaunty six-minute take of “Long Train Runnin'” where the group opens up for some jamming. Otherwise, this is a contract-fulfilling double album (boiled down to a single CD) that was, not surprisingly, removed from print and finally resuscitated for hardcore fans, the only ones who would be interested, as a digital-only release in 2009.