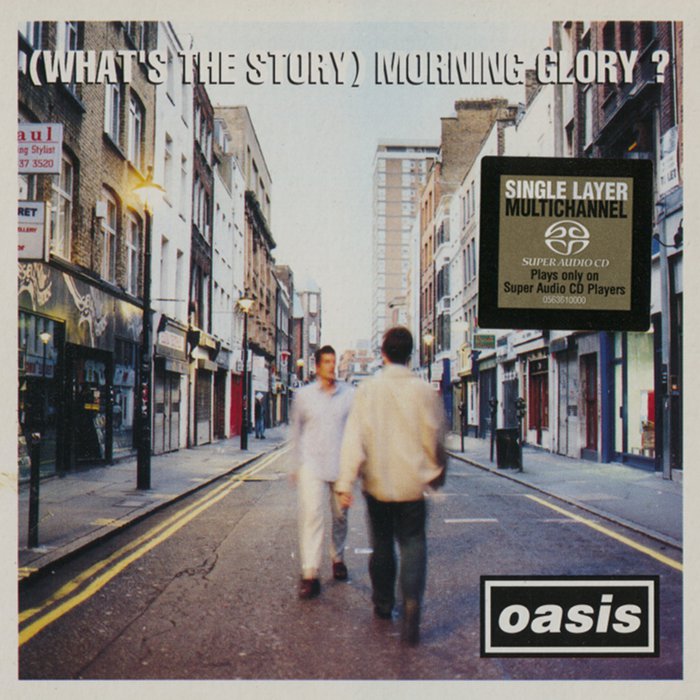 2003 SACD reissue, (What’s the Story) Morning Glory? is the second album by the UK rockers, Oasis. Originally released in October 1995 in the UK, the album was Oasis’ most enduring commercial success, charting at #1 in the UK for 10 weeks and #4 in the U.S. The album has sold over 18 million copies worldwide. It is the third biggest-selling album in UK chart history. Album singles “Some Might Say”, “Roll With It”, ” Wonderwall”, and “Don’t Look Back in Anger” were hits in the UK.

This big rock candy mountain of an album justifies some if by no means all of the poses and pretentious statements made by Manchester’s natural-born rock & roll deities. A dramatic attempt to rekindle the flames of the original British Invasion, Morning Glory rolls 30 years of Britpop tradition into one irresistible (if achingly self-conscious) whole. “Wonderwall” can be read as a Beatles tribute, “Don’t Look Back in Anger” feels like a Mott The Hoople anthem and “She’s Electric” and “Morning Glory” are chewy pop confections.

The cover photo was taken on Berwick Street in Soho, a London street known for its independent record shops. The two men on the cover are Sean Rowley (Sean Rowley, a DJ on BBC London 94.9.) and Owen Morris (the album producer for this album).

If Definitely Maybe was an unintentional concept album about wanting to be a rock & roll star, (What’s the Story) Morning Glory? is what happens after the dreams come true. Oasis turns in a relatively introspective second record, filled with big, gorgeous ballads instead of ripping rockers. Unlike Definitely Maybe, the production on Morning Glory is varied enough to handle the range in emotions; instead of drowning everything with amplifiers turned up to 12, there are strings, keyboards, and harmonicas. This expanded production helps give Noel Gallagher’s sweeping melodies an emotional resonance that he occasionally can’t convey lyrically. However, that is far from a fatal flaw; Gallagher’s lyrics work best in fragments, where the images catch in your mind and grow, thanks to the music. Gallagher may be guilty of some borrowing, or even plagiarism, but he uses the familiar riffs as building blocks. This is where his genius lies: He’s a thief and doesn’t have many original thoughts, but as a pop/rock melodicist he’s pretty much without peer. Likewise, as musicians, Oasis are hardly innovators, yet they have a majestic grandeur in their sound that makes ballads like “Wonderwall” or rockers like “Some Might Say” positively transcendent. Alan White does add authority to the rhythm section, but the most noticeable change is in Liam Gallagher. His voice sneered throughout Definitely Maybe, but on Morning Glory his singing has become more textured and skillful. He gives the lyric in the raging title track a hint of regret, is sympathetic on “Wonderwall,” defiant on “Some Might Say,” and humorous on “She’s Electric,” a bawdy rewrite of “Digsy’s Diner.” It might not have the immediate impact of Definitely Maybe, but Morning Glory is just as exciting and compulsively listenable.