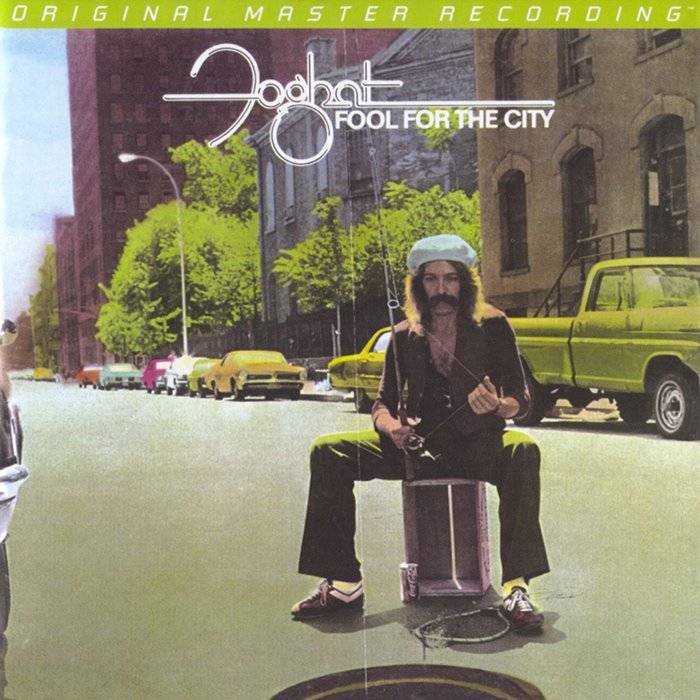 Fool for the City is the fifth album released by English rock band Foghat. This was their first platinum album and features, along with the title track, their signature song “Slow Ride”. The album cover shows drummer Roger Earl sitting alone on a soap box fishing down a manhole in the middle of East 11th Street (between 2nd and 3rd Avenue) in New York City.

After building a solid core audience through relentless touring and a string of hard-rocking albums, Foghat finally hit the big time in 1975 with Fool for the City. It still stands out as the best album in the group’s catalog because it matched their road-tested abilities as hard rockers to a consistent set of tunes that were both well-crafted and ambitious. The tone for the album is set by its title track: This hard-rocking gem not only pairs riff-driven verses with an effective shout-along chorus, but also throws in a few surprising moments where the guitars are taken out of the mix completely and Nick Jameson’s bass is allowed to take the lead in a funky breakdown. Fool for the City also produced an enduring rock radio favorite in “Slow Ride,” a stomping rock tune that transcends the inherent clichés of its “love is like a car ride” lyrics with a furious performance from the band and a clever arrangement that works in well-timed automotive sound effects during the verses and plays up the band’s ability to work an R&B-styled groove into their hard-rocking sound (again, note the thumping bassline from Jameson). Further radio play was earned with “Take It or Leave It,” an acoustic-based ballad that worked synthesizers into its subtle yet carefully layered arrangement to become one of the group’s finest slow numbers. The album’s other songs don’t stand like the aforementioned selections, but they all flow together nicely thanks to a consistently inspired performance from the band and clever little arrangement frills that keep the group’s boogie-oriented rock fresh (example: the witty spoken word bit at the end of “Drive Me Home”). All in all, Fool for the City is both Foghat’s finest achievement in the studio and one of the high points of 1970s hard rock.