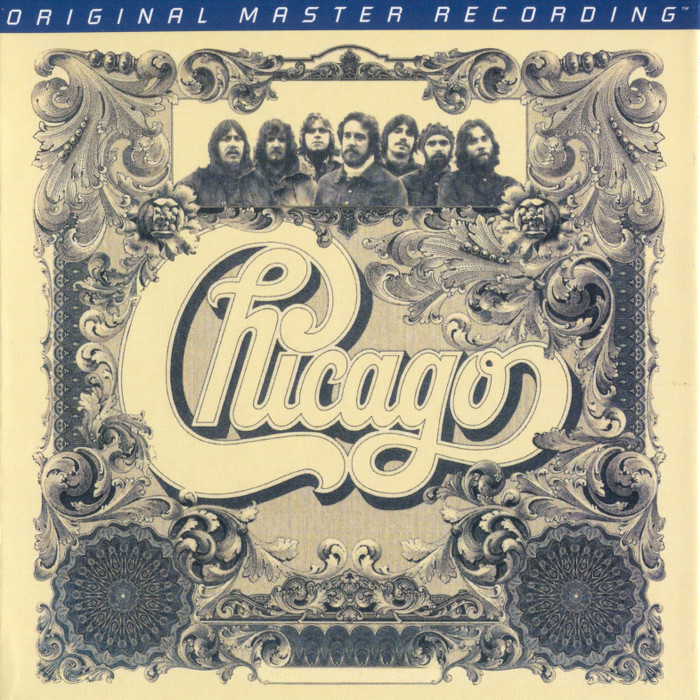 This is the sixth album from the jazz/pop/rock combo Chicago, and was likewise the first to be recorded at the plush, well-lit, and custom-built Caribou Studios in Nederland, CO. The facility was owned and operated by the band’s manager and producer, James William Guercio, and eventually became the group’s retreat for their next five (non-compilation) long-players. Another and perhaps more significant change was the incorporation of several “outside” additional musicians — most notably Laudir De Oliveira (percussion), who would remain with the band for the next seven years and eight LPs. Although Chicago had begun as a harder-edged rock & roll band, popular music styles were undergoing a shift during the mid-’70s into a decidedly more middle-of-the-road (MOR) and less-aggressive sound. This is reflected in the succinct pop and light rock efforts, contrasting the earlier lengthy and multi-movement epics that filled their earlier works. Nowhere is this more evident than on Chicago VI’s (1973) two Top Ten singles: the easygoing James Pankow (trombone) ballad “Just You & Me” as well as the up-tempo rocker “Feelin’ Stronger Every Day,” which Pankow co-wrote with Peter Cetera (vocal/bass). This more melodic and introverted sensibility pervades the rest of the disc as well — especially from Robert Lamm (keyboard/vocals), who is particularly prolific, penning half of the material on the disc. Even his sardonically titled “Critics’ Choice” — which is undoubtedly a musical rebuttal to Chicago’s increasingly negative critical assessment — is a languid and delicate response, rather than a full-force confutation. “Darlin’ Dear” — another Lamm contribution — on the other hand, is a horn-fuelled rocker that actually recalls Little Feat more than it does most of Chicago’s previous sides. Compositions from other bandmembers include the heartfelt Terry Kath (guitar/vocals) ballad “Jenny,” which features some fluid fretwork much in the same vein as that of Jimi Hendrix’s “Angel” or “Castles Made of Sand.” Additionally, Peter Cetera’s (bass/vocals) “In Terms of Two” includes a more down-home and countrified acoustic vibe. While Chicago VI is an undeniably strong effort — supported at the time by its chart-topping status — many bandmembers and longtime enthusiasts were beginning to grow apart from the lighter, pop-oriented material.