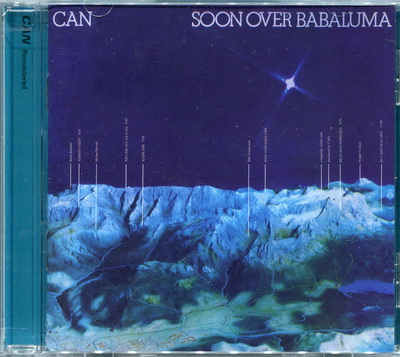 With Suzuki departed, vocal responsibilities were now split between Karoli and Schmidt. Wisely, neither try to clone Mooney or Suzuki, instead aiming for their own low-key way around things. The guitarist half speaks/half whispers his lines on the opening groover, “Dizzy Dizzy,” while on “Come Sta, La Luna” Schmidt uses a higher pitch that is mostly buried in the background. Czukay sounds like he’s throwing in some odd movie samples on that particular track, though perhaps it’s just heavy flanging on Schmidt’s vocals. Karoli’s guitar achieves near-flamenco levels on the song, an attractive development that matches up nicely with the slightly lighter and jazzier rhythms the band comes up with on tracks like “Splash.” Also, his violin work — uncredited on earlier releases — is a bit more prominent here. Musically, if things are a touch less intense on Babaluma, the sense of a band perfectly living in each other’s musical pocket and able to react on a dime hasn’t changed at all. “Chain Reaction,” the longest track on the album, shows that the combination of lengthy jam and slight relaxation actually can go together rather well. After an initial four minutes of quicker pulsing and rhythm (which sounds partly machine provided), things downshift into a slower vocal section before firing up again; Karoli’s blistering guitar work at this point is striking to behold. “Chain Reaction” bleeds into Babaluma’s final song, “Quantum Physics,” a more ominous piece with Czukay’s bass closer to the fore, shaded by Schmidt’s work and sometimes accompanied by Liebezeit. It makes for a nicely mysterious conclusion to the album.