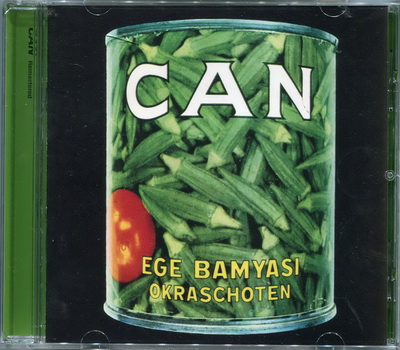 The follow-up to Tago Mago is only lesser in terms of being shorter; otherwise the Can collective delivers its expected musical recombination act with the usual power and ability. Liebezeit, at once minimalist and utterly funky, provides another base of key beat action for everyone to go off on — from the buried, lengthy solos by Karoli on “Pinch” to the rhythm box/keyboard action on “Spoon.” The latter song, which closes the album, is particularly fine, its sound hinting at an influence on everything from early Ultravox songs like “Hiroshima Mon Amour” to the hollower rhythms on many of Gary Numan’s first efforts. Liebezeit and Czukay’s groove on “One More Night,” calling to mind a particularly cool nightclub at the end of the evening, shows that Stereolab didn’t just take the brain-melting crunch side of Can as inspiration. The longest track, “Soup,” lets the band take off on another one of its trademark lengthy rhythm explorations, though not without some tweaks to the expected sound. About four minutes in, nearly everything drops away, with Schmidt and Liebezeit doing the most prominent work; after that, it shifts into some wonderfully grating and crumbling keyboards combined with Suzuki’s strange pronouncements, before ending with a series of random interjections from all the members. Playfulness abounds as much as skill: Slide whistles trade off with Suzuki on “Pinch”; squiggly keyboards end “Vitamin C”; and rollicking guitar highlights “I’m So Green.” The underrated and equally intriguing sense of drift that the band brings to its recordings continues as always. “Sing Swan Song” is particularly fine, a gentle float with Schmidt’s keyboards and Czukay’s bass taking the fore to support Suzuki’s sing-song vocal.