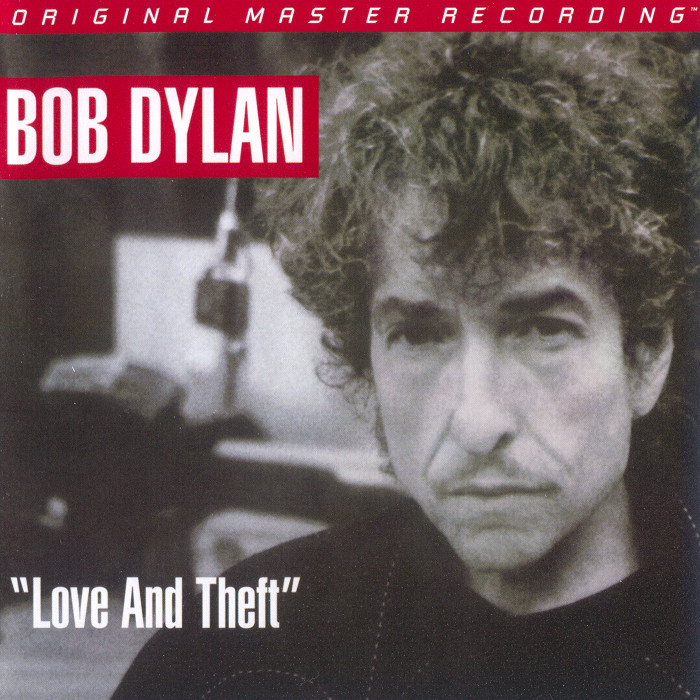 Bob Dylan’s Love and Theft is a visionary train ride through the vast American landscape and all its hills, valleys, mountains, river towns, and urban and rural settlements. As they burrow into villages and barrel across trestle bridges, the 2001 record’s songs introduce us to outlaws, outliers, gamblers, brawlers, tricksters, bootleggers, and scoundrels. It is, in effect, a commanding survey of and plunge into American music. Named the best album of the year by Rolling Stone and the Village Voice’s Pazz & Jop Critics Poll, anointed the second-best album of the decade by Newsweek, and later declared the 385th Greatest Album of All Time by Rolling Stone, Love and Theft remains the Nobel Laureate’s finest effort since 1975’s Blood on the Tracks – and an extension of the jesting, imagery, and free-form looseness present on his seminal 1960s works. Now, it possess knock-out sound.

Mastered from the original master tapes and strictly limited to 3,000 numbered copies, Mobile Fidelity’s transparent hybrid SACD reveals the you-are-there immediacy of Dylan’s production and the colorful textures inherent to every passage. Experienced on this audiophile version, the songs possess a sense of swing and naturalism so sure-footed that they seem to float, with Dylan and his crack ensemble setting up as a live band taking down the house in a deep-in-the-woods Louisiana shotgun shack. Prized aural traits such as presence, imaging, separation, and soundstaging depth don’t come better. This is the very definition of sonic chemistry.

Time Out of Mind was a legitimate comeback, Bob Dylan’s first collection of original songs in nearly ten years and a risky rumination on mortality, but its sequel, Love and Theft, is his true return to form, not just his best album since Blood on the Tracks, but the loosest, funniest, warmest record he’s made since The Basement Tapes. There are none of the foreboding, apocalyptic warnings that permeated Time Out of Mind and even underpinned “Things Have Changed,” his Oscar-winning theme to Curtis Hanson’s 2000 film Wonder Boys. Just as important, Daniel Lanois’ deliberately arty, diffuse production has retreated into the mist, replaced by an uncluttered, resonant production that gives Dylan and his ace backing band room to breathe. And they run wild with that liberty, rocking the house with the grinding “Lonesome Day Blues” and burning it down with the fabulously swinging “Summer Days.” They’re equally captivating on the slower songs, whether it’s the breezily romantic “Bye and Bye,” the torch song “Moonlight,” or the epic reflective closer, “Sugar Baby.” Musically, Dylan hasn’t been this natural or vital since he was with the Band, and even then, those records were never as relaxed and easy or even as hard-rocking as these. That alone would make Love and Theft a remarkable achievement, but they’re supported by a tremendous set of songs that fully synthesize all the strands in his music, from the folksinger of the early ’60s, through the absurdist storyteller of the mid-’60s, through the traditionalist of the early ’70s, to the grizzled professional of the ’90s. None of this is conscious, it’s all natural. There’s an ease to his writing and a swagger to his performance unheard in years – he’s cracking jokes and murmuring wry asides, telling stories, crooning, and swinging. It’s reminiscent of his classic records, but he’s never made a record that’s been such sheer, giddy fun as this, and it stands proudly among his very best albums.